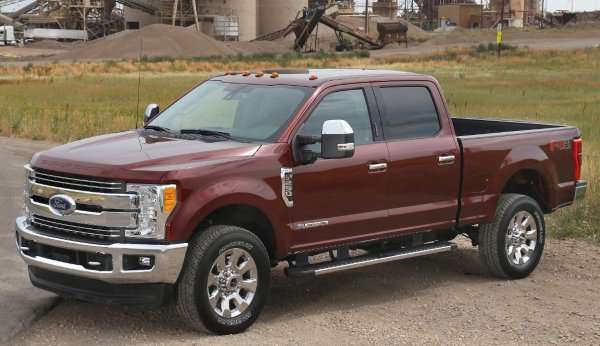 The configurator tool for the all-new, aluminum-bodied 2017 Ford Super Duty lineup has launched on Ford.com and as expected, the next generation F250, F350 and F450 receive varying levels of pricing increases depending on the trim line chosen – and today we bring you a quick look at the starting prices of the newest Ford pickups.
Advertisement

Back in May, the crew at Car & Driver announced some of the basic pricing for the 2017 Ford F250 and with the launch of the configurator tool on Ford.com, those preliminary prices have been confirmed. As expected, the new 2017 Super Duty is more expensive than the 2016 models, but just how much more expensive depends on which package the buyers selects.

As you might imagine, the pricing for the expansive 2017 Ford Super Duty lineup is fairly intricate, but here is a rundown of the basic starting prices for the various models and trimlines – along with a look at how much that same truck costs for the 2016 model year.

2017 Ford Super Duty Prices
As we reported back in May when Car & Driver rolled out the basic pricing for the 2017 Ford F250, the entire Super Duty lineup will see a pricing increase for the new model year – and this shouldn’t come as a surprise to anyone. In addition to the new lightweight aluminum body, the 2017 Super Duty will come with a long list of available features to make the F250, F350 and F450 the most capable trucks on the market. The 2017 models will include all sorts of goodies that either weren’t offered for 2016 or were only offered as options, leading to price increases across the board and while I won’t get into all of the fine print details – here is a rundown of the 2017 Super Duty pricing schedule changes.

(Note: None of these prices include the $1,195 destination fee, which remains unchanged from 2016)

If you are looking to buy a base model (XL) 2017 Ford Super Duty in any of the available models, it won’t cost you much more than it would have if you bought a 2016 version. The F250 base model (XL, gasoline engine, regular cab, short bed) increases by just $150 in both rear- and four-wheel drive form, while the 2017 F250 with the PowerStroke diesel engine increases by $265. Even stepping up to the XLT or Lariat models of the new F250 won’t cost you much more than a 2016 model, as the F250 XLT and Lariat only increase by a maximum of $485.