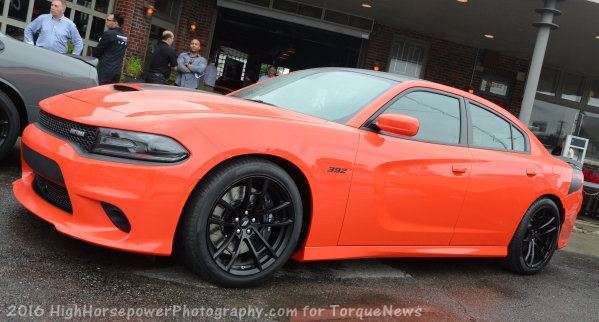 After discussing the pending availability of the 2017 Dodge Challenger T/A last week, we got some questions on the ordering status of the 2017 Dodge Charger Daytona and in speaking with my same dealership contacts, I was surprised to find that the newest Daytona is on sale now – and it has been for some time.
Advertisement

Shortly after that, I received a few questions from readers about the availability of the 2017 Dodge Charger Daytona, so I reached back out to my dealership contacts to ask if they knew when the new Daytona and Daytona 392 would go on sale. Much to my surprise, both of them stated that their dealerships began submitting orders for the new Charger Daytona sometime last month, so if you have been drooling over the new SRT-inspired performance sedan – you should be able to order one at your local Dodge dealership right now.

The 2017 Charger Daytona
For those who need a refresher on the 2017 Dodge Charger Daytona, here is a quick rundown on the two different versions of the new Daytona package.

First up, we have the 2017 Dodge Charger Daytona, which is based on the Charger R/T with the 5.7L Hemi and the 8-speed automatic transmission. The Daytona package adds a 2.75 inch active exhaust system, a Mopar cold air intake package, a 2.62 rear gear ratio, the Super Track Pak (sport tuned suspension, performance brake pads, a unique stability control system with a “full off” setting and Goodyear Eagle F1 tires), the front and rear fascia, side sills rear spoiler and hood of the Charger SRT models, unique black Daytona and Hemi graphics, a blacked out roof and unique 20 inch wheels. Also, the inside of the Charger Daytona benefits from some items from the pricier SRT models, including the heated and cooled Nappa leather seats with the Daytona logo embroidered on the seatback.

These changes give the R/T-level Charger a more aggressive exterior design, improved handling, improved acceleration, more attitude via the exhaust system and a more luxurious cabin – all for just $40,895 with destination.

The 2017 Charger Daytona 392
The 2017 Dodge Charger Daytona 392 is similar to the Charger Daytona, but this package begins with the 392 cubic inch Hemi, delivering 485 horsepower and 475lb-ft of torque to the rear wheels via an 8-speed automatic transmission. Like the less powerful models, the Daytona 392 has the SRT body bits, the 2.75 inch active exhaust, package-specific exterior badging and the sport suspension, the Daytona 392 also gets the huge Brembo brake package from the Hellcat Charger, unique 20 inch wheels wrapped in the Hellcat’s sticky Pirelli rubber and a 180mph speedometer.

If either of these two packages steals your heart, you can head to your local Dodge dealership today and place an order, with the first units expected to hit dealers before the end of the 2016 calendar year.