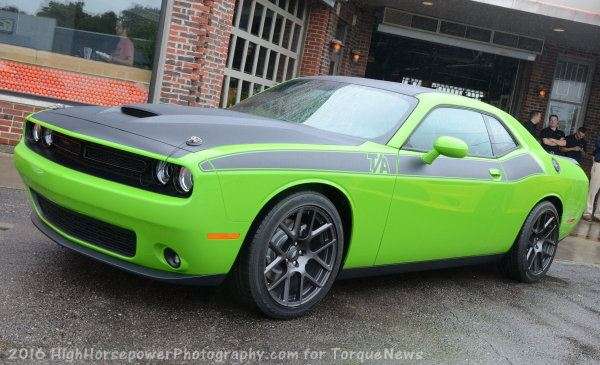 If you have been eagerly awaiting the arrival of a 2017 Dodge Challenger T/A that you have ordered over the past six weeks, your wait is nearly over – as a new report states that production of the new Challenger T/A has begun in the Brampton Assembly Plant.
Advertisement

When the 2017 Challenger T/A was first introduced back in August, Dodge claimed that the first units would reach dealerships by the end of 2016 and based on this report from Allpar, the first examples are coming off of the assembly line and being prepped to head to dealerships as you read this.

2017 Challenger T/A Production
Like all of the modern Dodge Challengers, the new T/A models will be built in FCA’s Brampton, Ontario assembly plant. According to Allpar, an inside source has confirmed that the first examples of the 2017 T/A have rolled down the Brampton line, so after the usual quality control process – these new muscle cars will begin shipping to dealerships around the USA.

This means that if you ordered a 2017 Dodge Challenger T/A went the order banks opened by in October, you could have your car within the next few weeks. This also means that cars ordered for dealer inventory will also be built and shipped, but based on the level of interest in the new Challenger T/A, I expect that they will be hard to find in the coming months – at least without some sort of dealership markup.

Fortunately, since none of the key components of the Dodge Challenger T/A, T/A Plus or T/A 392 are available in limited supplies right now, so the company should be able to build a large number of these muscle cars in the coming months – meaning that there should be plenty of them available around the country by spring.

For a full rundown on each of the 2017 Dodge Challenger T/A packages, click here for a detailed look at the new models.