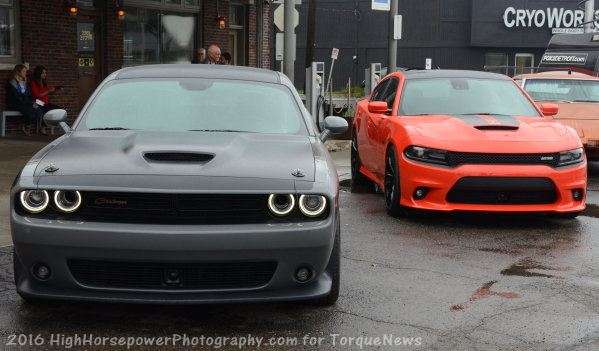 FCA has announced that the Dodge Challenger and Dodge Charger for the 2017 model years have received the NHTSA’s 5-star overall safety rating – the highest score available – essentially making the most powerful American models among the safest as well.
Advertisement

The National Highway Traffic Safety Administration has become the most trusted source in terms of safety ratings and based on their latest scores for the 2017 Challenger and 2017 Charger, these two high performance Dodge cars are among the safest cars on the road. Both the 2017 Challenger and the 2017 Charger scored a 5-star overall rating, the highest possible score in the NHTSA crash test system and for the Charger, this is the 10th straight time that it has received the top overall score.

How NHTSA Crash Tests Work
Before getting into the results of the 2017 Challenger and Charger NHTSA testing, a quick overview of how the system works.

The NHTSA crash test safety scores are broken up into 3 key tests which lead to the overall score – Frontal Crash, Side Crash and Rollover. Frontal Crash has the car hitting a fixed barrier at 35 miles per hour. Side Crash has each side of the car being hit at 35mph by a barrier (simulating an intersection type impact) and the car being push into a pole at 20mph. The Rollover test includes an aggressive lane change maneuver intended to create the best chance of the car flipping over.

Within each of those 3 tests, there are specific metrics based on the simulated crashes mentioned above, all of which lead to the overall score.

In the Frontal Crash test, the 2017 Challenger scored 4 stars on the driver’s side and 5 stars on the passenger side, leading to the Front Crash 4-star rating.

Finally, in the Rollover test, there was no “tip” in the dynamic test, but with a Risk of Rollover score of 11.1%, the Challenger only got a 4-star Rollover rating.

Finally, the 2017 Dodge Charger scored a perfect 5-star rating in the Rollover test, with just a 10.1% Risk of Rollover.

Challenger, Charger Vs the Competitors
While it is nice to see that the 2017 Dodge Challenger and Charger meet the highest level of expectations in most NHTSA crash tests, it is important to note how these high performance Dodge cars did relative to the competition. I looked up the results for the 2017 Chevrolet Camaro, the 2017 Ford Mustang, the 2017 Chevrolet Impala and the 2017 Ford Taurus to see how the Challenger and Charger did compared to the key rivals in each segment.

Oddly, the Chevrolet Camaro hasn’t been included in the NHTSA testing since the previous generation, but the 2017 Ford Mustang has been tested in the same manner as the 2017 Challenger. Like the Challenger, the Mustang scored a 5-star Overall rating, but the Ford did marginally better in the 3 key factors – scoring 5 stars in Frontal Crash, Side Crash and Rollover.

It is a little more difficult to compare the Dodge Charger to the competitors from Chevrolet and Ford, since the large sedans from both of those automakers are front wheel drive. Due to the different drivetrain architecture, the results of crash tests differ a bit – but they are all 5-star Overall vehicles.

The Charger scored 4 stars in Frontal Crash while the Chevrolet Impala and Ford Taurus both scored 5 stars. All three of these large sedans scored 5 stars in the Side Crash test, but with the lowest Risk of Rollover among the three – the Dodge Charger was the only one of these three large American sedans to get a 5-star Rollover rating.