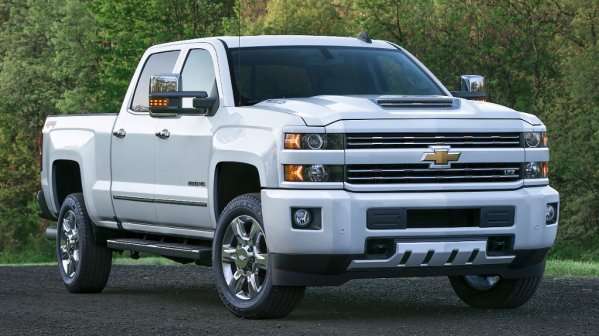 General Motors has announced that when the 2017 Chevrolet Silverado HD with the Duramax diesel engine hits the street later this year, it will have a new functional “ram air” hood that will help deliver improved performance in a broader range of conditions – while also looking pretty freakin’ cool.
Advertisement

A variety of General Motors products in the past have had hood scoop systems which helped feed the engine cooler air, but starting for the 2017 model year, the newest GM vehicle to rock the ram air hood will be the Chevrolet Silverado HD with the Duramax diesel engine. The details are short right now, so it is unclear whether this hood system is standard or optional – or whether it will be offered with the gasoline engine in the 2017 Silverado HD – but the information offered along with the image above is more than enough to catch my interest.

“The 2017 Silverado HD was engineered to provide maximum utility for our customers in even the most extreme situations,” said Eric Stanczak, chief engineer, Silverado HD. “While developing this all-new induction system, we considered our customers towing a maximum-weight trailer through the Eisenhower Tunnel on a hot, rainy summer day.”

The 2017 Silverado HD Ram Air Hood
In the past, General Motors vehicles with hood scoops or ram air style hoods were typically looking to feed a high performance engine with the hopes of going faster. With the 2017 Silverado HD, the goal is to help feed the Duramax diesel engine cooler air in a more efficient manner, which will help improve the output of the engine during the most grueling conditions.

Here is how the Silverado ram air hood works:
There are actually two different engine air intake outlets in the 2017 Chevrolet Silverado HD with the ram air hood – one in the front fenderwell area and the other is the huge opening at the leading edge of the hood. 60% of the engine air is jammed in through the new hood scoop while the other 40% comes from the fenderwell area. In a case where the hood scoop is blocked, say by packed snow or ice, the fenderwell intake can draw in the full amount of air needed to safely feed the engine. Also, there is a water-extractor system built into the ram air hood intake setup, so drivers don’t need to worry about driving in even the hardest rain.

“Big, heavy raindrops from a thunderstorm are relatively easy to eliminate from air. The more challenging issue comes from the mist-like spray generated by semitrucks on wet highways. Those very fine water droplets prove more challenging to separate from the air. The air intake is an elegant solution that works well with water droplets of all sizes. For customers, the results delivers maximum engine performance and even greater towing confidence.”

Now, the GM announcement doesn’t state the new ram air hood for the 2017 Chevrolet Silverado HD adds any power, but instead, this flow of cooler air should allow the Duramax diesel engine to run cooler and more efficiently – thus making better power in extreme conditions. As any combustion engine gets very hot, performance is reduced, so providing the coolest air possible helps to maintain peak output when the engine is working its hardest.

Unfortunately, there are no details on the availability of this ram air hood system, but considering how mean it makes the 2017 Silverado HD look in these pictures, I expect that it will be a popular addition for the new model year. In fact, I wouldn’t be surprised to see this hood system offered on more Chevrolet and GMC trucks, since all trucks can benefit from a cold air intake setup like this one…especially when it looks great.

Elon Musk Says Tesla To Offer Car Insurance in Texas Next Month, But These Challenges Exist
Tesla Co-Found Plans To Build a Battery Factory and Shift The Industry
END_OF_DOCUMENT_TOKEN_TO_BE_REPLACED