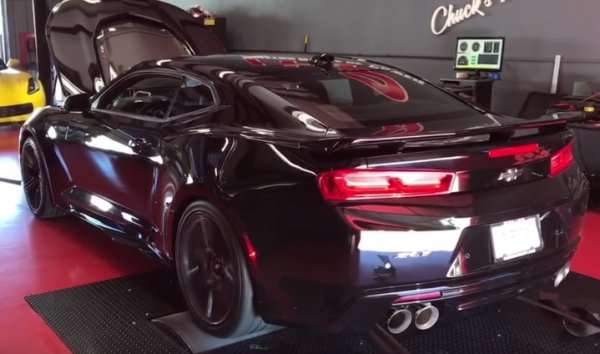 New 2017 Chevrolet Camaro ZL1s are reaching owners around the country, leading to real world examples of the supercharged GM muscle car in action – including this video showing a 6th gen Camaro ZL1 hitting the dyno and laying down 554 stock rear wheel horsepower.
Advertisement

The 2017 Chevrolet Camaro ZL1 is the most powerful factory built GM muscle car ever, with the supercharged LT4 delivering official figures of 650 horsepower and 650lb-ft of torque. Those figures are, of course, rated at the transmission rather than at the wheels, but when most modern performance car owners begin a high performance project – they get a baseline measure of the power at the rear wheels.

In this case, the owner of a 2017 Chevrolet Camaro ZL1 has made a stop at the Houston House of Power to see what kind of power this blown beast is making at the rear wheels in stock form.

Stock 6th Gen Camaro ZL1 on the Dyno
The black 2017 Chevrolet Camaro ZL1 shown in the video below is stock and equipped with the standard manual transmission. On a Dynojet brand dynamometer, this LT4-powered Camaro ZL1 laid down 554 rear wheel horsepower and 532lb-ft of rear wheel torque. When compared to the official power numbers from the manufacturer, the new Camaro ZL1 “loses” right around 15% of its horsepower and about 18% of its torque between the crankshaft and the tires.

Considering that the industry generally predicts a drivetrain loss of roughly 15%, the power figures of the 2017 Camaro ZL1 are right in line with what we would have predicted for a manual transmission car. This video also serves to validate the “15-18% rule” when guessing wheel horsepower numbers based on official manufacturer’s claims.

Camaro ZL1 –vs- Hellcat Challenger
There are two supercharged muscle cars sold in America right now – the 2017 Chevrolet Camaro ZL1 and the 2017 Dodge Challenger SRT Hellcat – so it only makes sense that the two will be compared very regularly. On paper, the Challenger has an advantage in horsepower (707 to 650) and the two are even in torque, but it has been proven time and time again that the Hellcat Hemi is underrated at 707 horsepower and 650lb-ft of torque.

That difference is likely due to the differences in dyno settings coupled with local conditions, but for the sake of this discussion, I will use the lower of the two groups for comparison. It seems that the most common wheel horsepower range among Hellcat owners is right around 620, so when compared to the official figure of 707hp, the Hellcat cars are losing around 12% of their power on the way to the wheels.

In short, based on the video below and the lower real world figures gathered from the Hellcat community, the Dodge Challenger SRT Hellcat has a significant advantage in terms of wheel horsepower, generally packing about 75 more ponies than the Camaro in action here. The Camaro is around 500lbs lighter, so it will be interesting to see what kind of stock quarter mile times surface when new ZL1 owners get some seat time at the track.

In the meantime, crank up your speakers and enjoy the stock roar of the 2017 Chevrolet Camaro ZL1.