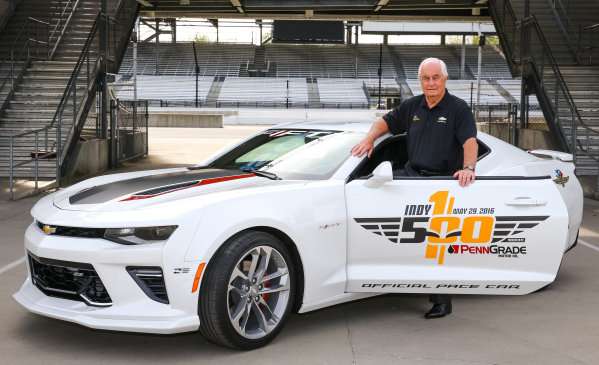 A new Chevrolet Camaro SS 50th Anniversary edition will serve as the official pace car for the 2016 Indianapolis 500 with legendary team owner Roger Penske at the wheel – marking the 5th time in the past 7 years where a Camaro has been the Indy 500 pace car.
Advertisement

We learned earlier this month that the 6th generation Chevrolet Camaro SS Convertible would serve as the 2016 Indy 500 Festival Car and at that point, we knew that the official pace car for the 100th running of the Indianapolis 500 would be a Chevrolet product as well. We expected that it would be a new Camaro as well, but this morning General Motors announced that the 2017 Camaro SS coupe would serve as the official pace car for the 2016 Indy 500.

It was also announced that long time team owner and rental truck mogul Roger Penske would pilot the 2017 Camaro SS prior to the drivers taking the opening green flag. It was not specified, but I expect that long-time pace car driver Johnny Rutherford will handle the field during caution flags, but following in the footsteps of Jeff Gordon, Dario Franchetti, Jim Harbaugh and Guy Fieri, Penske will lead the field to the opening green flag.

“Chevrolet and the Indianapolis 500 have a long, storied history and it’s an honor to mark the respective milestones of the Indy 500 race and the Camaro simultaneously,” said Mark Reuss, executive vice president of Global Product Development and Global Purchasing and Supply Chain. “It’s also a privilege to have Roger Penske perform the driving duties, as his team has helped Chevrolet earn four consecutive IndyCar manufacturer titles since 2012.”

2016 Indy 500 Pace Car
There are actually four 2017 Chevrolet Camaro SS Indy 500 pace cars, all of which are fitted with the 455hp LT1 V8 and the 8-speed automatic transmission, painted a unique Abalone White exterior paint and finished with “100th Running of the Indianapolis 500” on the doors and the Indianapolis Motor Speedway winged wheel logo on the rear quarter panels. Finally, the 2016 Indy 500 Camaro pace cars have the wheels and badging of the 50th Anniversary Edition package.

2016 marks the 9th time that the Chevrolet Camaro has been the official pace car of the Indy 500. During the first generation of the Camaro, the 1967 and 1969 RS/SS model led the field. The second generation Camaro never served as the Indy 500 pace car, but the third gen Camaro was the pace car in 1982 (the first year for the third gen Camaro) and again in 1993, both in Z28 coupe form. Finally, during the fifth generation of the Camaro, the Camaro SS coupe led the field in 2009 and 2010, the 2011 race had a Camaro SS convertible and the 2014 Indy 500 featured the Camaro Z28.

Long History with the Indy 500
2016 marks the 100th running of the Indy 500, having first been run in 1911 and skipping a few years along the way. The first Chevrolet pace car came back in 1948, when a Fleetmaster Six led the field and since then, 26 other Chevy products have been the Indy 500 pace car. The Chevrolet Corvette is the most commonly featured Chevrolet product, leading the field 13 times over the course of the 100 Indy 500 races. The Camaro is second with 9 times (including the 2016 race) while the SSR pickup, the Monte Carlo, the Beretta, the Bel Air and the Fleetmaster Six have each been the pace car once.

In addition to the 27 times that a Chevrolet has led the Indy 500 field, a General Motors vehicle has been the pace car 24 times, including 11 times for the Oldsmobile brand, 6 from Buick, 4 from Pontiac and 3 from Cadillac. The very first GM brand vehicle to lead the field came back in 1931, when the Cadillac 370 Twelve had the honor of serving as the Indy 500 pace car. With Chevrolet leading the field 27 times and the other GM brands leading the field 24 times, GM has been responsible for 51 of the 100 - guaranteeing that they have built more Indy 500 pace cars than any other automaker.

The last time that the Indy 500 field wasn’t led by a GM vehicle was back in 1996, when the Dodge Viper GTS led the field.

Toyota vs Tesla: Which Stock To Buy These Days
For Some Former Daimler Managers Daimler Is Authority, While Tesla Is Like a Startup
END_OF_DOCUMENT_TOKEN_TO_BE_REPLACED