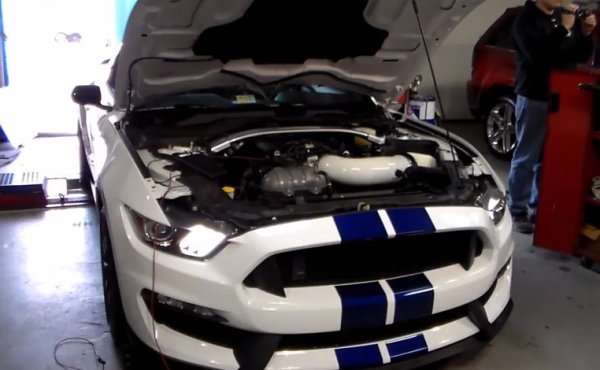 A video has hit the internet showing the 2016 Ford Shelby GT350 Mustang getting a workout on the dyno and while the stock results are solid, the power gained by adding a simple cold air intake and a good engine tune is the real star of the show here.
Advertisement

This white and blue 2016 Ford Shelby GT350 Mustang is owned by a member of Mustang6G.com who goes by the handle Mustang33. He recently took delivery of his GT350 and one of his first stops was his local performance shop, where they made a couple stock baseline runs, a couple runs with just an engine tune and a couple runs with a new JLT cold air intake and an engine tune – with the overall gains being 34 rear wheel horsepower. That is a pretty impressive figure for such simple modifications which have become so incredibly common in the modern performance world.

GT350 On the Dyno
The video below shows a handful of dyno blasts by the 2016 Ford Shelby GT350 Mustang from several different angles – allowing us to see and hear the 5.2L flat plane V8 while it is stretching its legs. The details in the video are short and we don’t get a very good look at the dyno screen in the video, but the post on Mustang6g filled us in on all of the important figures.

The GT350 Mustang was tested in stock form, with a tune and with the new JLT cold air intake coupled with a tune. In stock form, the new Shelby Mustang put 451 horsepower to the rear wheels and adding a custom engine tune lifted the power levels up to 464.5 horsepower (again, all of these numbers are wheel horsepower), meaning that just the tune added around 13.5 horsepower. When the JLT intake was added with another tune that makes the most of the additional airflow, the GT350 Mustang sent 484 horsepower to the rollers – leading to a total gain of 33 rear wheel horsepower from what are likely the two most common modifications in the modern performance world.

Calculating the Loss
The 2016 Ford Shelby GT350 Mustang officially makes 526 horsepower at the transmission and from the baseline runs, we know that 451 of those ponies make it from the engine bay to the wheels. That loss of 75 horsepower leads to a drivetrain loss ratio of roughly 14%, which is right in the expected range based on the industry norm. Many cars lose between 12-18% of the engine power on the way to the wheels, so 14% loss through the 6-speed manual transmission of the new Shelby Mustang is a very reasonable figure.

If we take the peak number of 484 horsepower and calculate engine horsepower based on the 14% loss, the 5.2L flat plane V8 in this 2016 Shelby GT350 Mustang is producing around 563 horsepower at the transmission – meaning that the intake and the tune added somewhere in the area of 38 horsepower overall.

Most importantly, this Shelby GT350 Mustang just sounds incredible with the intake, so crank up your speakers and fall a little more in love with the newest Shelby Mustang!