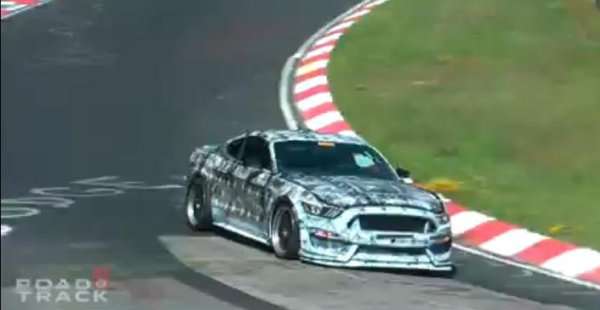 While we still don’t know for sure what the highest performance version of the 2015 Ford Mustang will be called, video has surfaced of the next gen super-Stang in action on the German Nürburgring, giving us the best opportunity yet to see and hear fastest pony in action and honestly – it sounds incredible.
Advertisement

While it is all but official that there will be an ultra high performance version of the 2015 Ford Mustang, we don’t know what it will be called and we don’t know exactly when it will arrive. It is widely speculated that it will still be badged as a Shelby and not an SVT as previous expected, that it will arrive for the 2016 model year and, unlike the 2014 Shelby models – it will be called the GT350 rather than the GT500.

In any case, while we really don’t know anything about the future super-Stang, we know that the 2015 Ford Mustang prototype caught blasting around the Nurburgring by the folks at Road & Track looks great, sounds incredible and handles the rough corners of the famed German road course very, very well. We don’t get to see what kinds of times the 2016 Shelby GT350 Mustang runs at the Ring, but that doesn’t matter as just seeing this car in action is enough to excite anyone who loves high performance cars.

This Mustang Looks Wicked Even in Camo
The 2016 Ford Mustang Shelby GT350 shown in the video below has a distinct body package that appears include a different hood than the Mustang GT as well as a front fascia that is vastly more aggressive than the Mustang GT front clip. In fact, the front chin spoiler is so low to the ground and so aggressive that at some points in the video, it appears to scrape the ground in areas where the track elevation changes quickly.

Along the sides, this 2016 Ford Shelby GT350 Mustang has a set of unique wheels that are tucked tightly up into the wheelwells with a more aggressive side skirt running between the wheels to further give this Mustang a lower, sportier stance. The back end is the toughest part to make out due to the shadows and the speed at which the next generation Shelby Mustang is roaring away into the distance, but it appears as though there is a very low profile spoiler on the trunklid along with a sporty lower rear fascia that appears to have large ports on the outer corner and then another set that is located inwards – flanking the area under the license plate. Based on what I have seen around the Detroit area in terms of Shelby Mustang test mules, I believe that the outer opening is where the exhaust comes out while the smaller, more central openings are designed to better control the air flow out the back of the vehicle.

2016 Mustang GT350 or Something More?
Living in the Metro Detroit area, I have seen more than a few of what is believed to be the Shelby version of the 2015 Ford Mustang and those models do not have the same super aggressive front fascia design. They definitely have a bolder lower grille area than the Mustang GT, but there is obviously more ground clearance in the front end of the test cars running around this area. Because of that, I don’t believe that what we are seeing here is the “normal” Shelby GT350 – or whatever Ford will call it when it reaches dealerships.

I believe that this 2016 Ford Shelby GT350 Mustang is either a special, high performance package similar to the likes of the Boss 302 Laguna Seca Edition (Road & Track calls it the GT350R) or this is simply a 2016 GT350 with something like the SVT Performance Package that has added the substantial chin spoiler. There is also the option that this car is wearing something as simple as a chin spoiler that is only being used for testing…but I do not expect to see a lower front fascia this aggressive on the standard 2016 Mustang Shelby GT350 when it arrives next year.

In any case, this next generation Ford Mustang looks great and sounds great as it rockets around the Nürburgring so crank up your speakers and enjoy!

Image above was captured from the Road & Track video shown here.