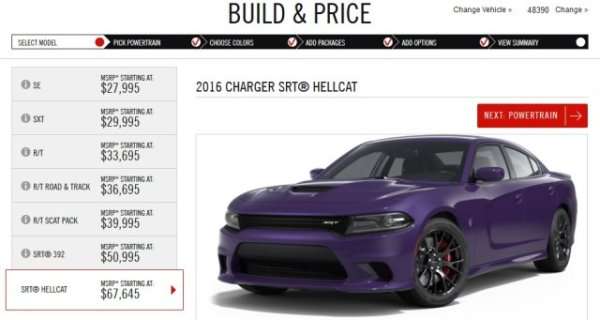 The configurator page on Dodge.com for the 2016 Dodge Charger has finally gone live and while the majority of the numbers we reported last month have proven to be accurate, there are a few differences from those leaked numbers and most importantly, we know that the 2016 Hellcat Charger has an actual base price of $68,640.
Advertisement

Back in mid-October, we got ahold of some preliminary pricing figures for the 2016 Dodge Charger that was include in some dealership information, but we pointed out back then that the actual numbers might vary. With the launch of the 2016 Dodge Charger configurator on Dodge.com, the pricing numbers for the 4-door muscle car are now fully official – including the pricing for the various options and packages.

Pricing Out the 2016 Hellcat Charger
When you build your own 2016 Dodge Charger SRT Hellcat on Dodge.com, there are only a few options including the engine block heater ($95), red seat belts ($195), the Harman Kardon audio group ($1,995), the black painted roof ($1,500) and the summer performance tires ($595). Finally, there are 11 exterior colors including Plum Crazy (shown above) and only two exterior options – Ivory Tri-Coat and Redline Red – come with the $500 upcharge. You can also pick Laguna Leather in all black or black/sepia or the Alcantara/Nappa leather in black/red or all black with no additional cost for any of the interior layouts.

If you pick every available option for the 2016 Dodge Charger SRT Hellcat, you get a total price of $72,825 – but the demand for both Hellcat cars is still high enough that it will take some serious dealership connections to get ahold of a 2016 Hellcat Charger for MSRP.