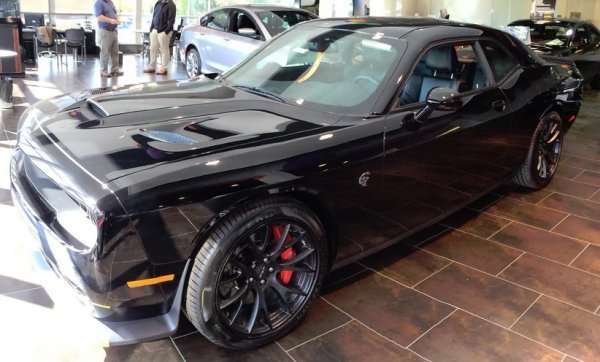 2016 Dodge Challenger and Charger in Dealers Now - Including the Hellcat

Since about halfway through the 2015 calendar year, the Hellcat Challenger and Charger have been sold out and lots of people have been eagerly awaiting the arrival of the 2016 model year Hellcat cars – since these new models give many people a new chance at buying one of the awe-inspiring, 707hp muscle cars. While we had heard that the 2016 models were shipping, we didn’t want to state that the 2016 models are in showrooms without visual confirmation. Fortunately, I was sent the window sticker and the image of the 2016 Challenger Hellcat in the showroom of Adventure Chrysler Jeep Dodge in Willoughby, Ohio.

The 2016s Arrive
The image above shows a 2016 Dodge Challenger SRT Hellcat sitting in the showroom of Adventure Chrysler Jeep Dodge, proving that the 2016 models are reaching dealerships and new owners around the country.

Before anyone reading this gets too excited, the Hellcat Challenger shown above has been sold, but this certainly isn’t the only 2016 Challenger to reach a dealership – so the odds are good that a 2016 Hellcat will be arriving at your local dealership very soon. Also, if you ordered a 2016 Hellcat Challenger or Charger when the order banks opened last month, it shouldn’t be long before you get ahold of your new muscle car.

Also, a representative from Adventure Chrysler Jeep Dodge explained that they also have a 2016 Charger SXT in stock, so while I have not seen proof of a Hellcat Charger being delivered for the 2016 model year – Adventure’s stock is proof that both the 2-door and 4-door Dodge muscle cars are shipping right now.

Finally, while the folks at Adventure haven't gotten a Plum Crazy car thus far, I have seen plenty of images of the 2016 Challenger and Charger in the limited edition deep metallic purple paint, so if you ordered a Plum Crazy car - it should be on its way soon.

Hellcats, Scat Packs Will Still Be Hard to Get
While the 2016 model year shouldn’t bring the same massive sales rush that we saw with the 2015 models (due to the fact that the 2015 models were the first-year for the current versions), the most popular models from the Challenger and Charger lineup will still be hard to get early on. Particularly in the case of the Hellcat Challenger and Charger, we can expect to see a decent wait for those who haven’t preordered the car, but with 2015 Hellcat Challengers with the manual transmission sitting on lots around the country – it IS possible to buy a 707hp Challenger today, provided that you are willing to do some traveling and spending.

The Challenger Scat Pack sold out in 2015 and it is likely to be just as popular in 2016, so if you want one of the budget-friendly 485hp Challengers, you would be wise to contact your local Dodge dealership and place an order ASAP – especially if you want the 8-speed automatic transmission.

For those who want to get a new Hellcat or Scat Pack Challenger or Charger without having to preorder one could get lucky and find one with an automatic transmission sitting on a dealership lot, but I wouldn’t expect that to be true until sometime in the Spring or Summer of 2016.

A Special Thanks to the folks at Adventure Chrysler Jeep Dodge for the input on the 2016 models!