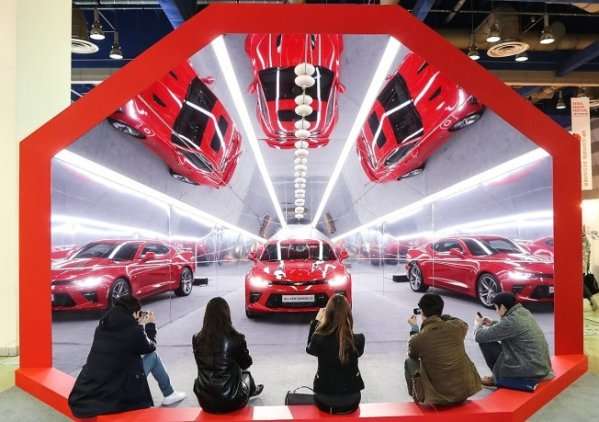 The new Chevrolet Camaro SS is proving to be a popular high performance option in the South Korean market and to celebrate the launch of the new GM muscle car, the 2016 Camaro SS was featured in a unique art exhibit at the recent 2016 Seoul Design Festival – giving attendees a rare chance to see the car from a variety of unusual angles.
Advertisement

While the Chevrolet Camaro sells the best here in the good ol’ USA, General Motors is working on making the Camaro a global muscle car, and with Chevrolet’s success in South Korea – it comes as no surprise that the Korean market is getting the hot new Camaro. With 453 horsepower (the Korean Chevrolet website reports the power as 453 – not 455), the Camaro is one of the most powerful models on the Korean market, but at the 2016 Seoul Design Festival, one artist showed that the new Camaro should be appreciated for its look just as much as its power.

Camaro is Art
The 2016 Chevrolet Camaro SS which was displayed at the 2016 Seoul Design Festival was part of the “Camaro is Art” exhibit, created by space designer Kim Chi-ho. This artist placed a 2016 Camaro SS with the Volcano Red package in a tunnel of mirrors angled in such a way that onlookers can view the Camaro from six different angles at one time. The mirrors are slightly angled to create more of a tunnel effect, so when viewed from the front – the tunnel seems to go on forever, while the exhibit itself is really only about the size of a small garage.

As you can see in the image above, when seated on the small bench mounted at the front of the display, onlookers can see the front, top and sides of the car from every key angle, all at once. Really, the only part of the new Camaro that you cannot see is the rear panel, but the mirrored exhibit does a great job of highlighting the exterior features of the new Chevy muscle car. Also, with the mirrors above the car, viewers can see the bright red interior as well, all without getting into the car.

"We have set up a new style of customer experience marketing based on the Chevrolet brand philosophy that pursues its unceasing potential,” said Lee Il-seop, managing director of GMM Korea. "We are planning to deliver a young and dynamic brand image through our products, and we will once again mark the sophisticated style of the Camaro SS sublimated into art into our customers' minds."

While exterior appearance is always a matter of opinion, there are plenty of Camaro fans out there who love the look of the 6th gen Chevy muscle car and for those Korean Camaro enthusiasts – the Camaro is Art exhibit at the Seoul Design Festival was likely one of the most exciting aspects of the event.