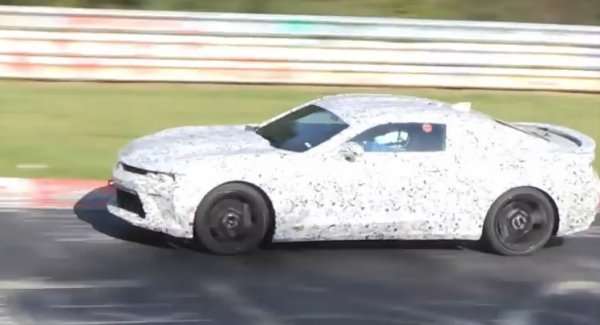 A new video has surfaced showing the 2016 Chevrolet Camaro being tested at the famed German Nürburgring, giving us all our best look yet at the next generation GM muscle car in action while also letting hear the roaring V8 of the new Camaro.
Advertisement

There is no place in the world that puts a car through a test like the Nürburgring and with General Motors preparing their next generation Chevrolet Camaro for the 2016 model year, it comes as no surprise that GM is working the new muscle car out on the famed German road course. Fortunately, a cameraman who was at the track and on the ball captured footage of the next generation Camaro rocketing around “The Ring” and he or she posted that video on YouTube for the world to enjoy.

This new footage is the best yet of the 2016 Chevrolet Camaro and while we don’t know anything about this car other than the fact that it is the next generation Camaro – this video is more than enough to re-peak our interest in the new GM muscle car.

What Camaro is This?
We don’t know for sure which 2016 Chevrolet Camaro this is, but there is no question that this car is packing a V8 engine. It appears to have a large rear fascia opening for four round exhaust tips or two large tips along with a low profile rear spoiler and those could be features of a higher end trimline (something like a new ZL1). However, the front end of this Camaro seems far too subtle to be the ZL1, with no type of chin spoiler or deep reaching front fascia to keep air from getting under the car. Also, there is quite a bit of wheel gap and I don’t hear any supercharger so I believe very strongly that this is the 2016 Camaro SS.

However, regardless of the type of V8 – there is no question that this 2016 Camaro sounds great blasting around the world’s most infamous road course.

Best Look at the 2016 Camaro
While there have been some spy shots of the 2016 Chevrolet Camaro floating around the internet over the past few weeks, this is the best chance to see the next gen model from every angle. Even with the black and white camo wrap covering the entire body, we can see some sharp sculpting through the front and rear end along with a rear window form that appears to be a touch more slippery than the current models. The image above is a still captured from the video below, and it provides a great look at the full form of the 2016 Camaro. Overall, this Camaro really doesn’t look all that different from the current models, but the aspects of the new Alpha platform Camaro are clearly present in this Nürburgring video.

The Roar of the LT1 V8 in the Camaro
Now, there is a chance that the 2016 Chevrolet Camaro shown here is relying on some new engine, but the odds are good that we are hearing the LT1 V8 from the Corvette Stingray in the new Camaro for the first time…and it sounds fantastic. We get to hear the new Camaro SS roar towards us and then blast away through both acceleration and deceleration. No matter the situation, this Camaro sounds awesome so when watching the video below, make sure to have your speakers cranked up to get the full impact of the video.