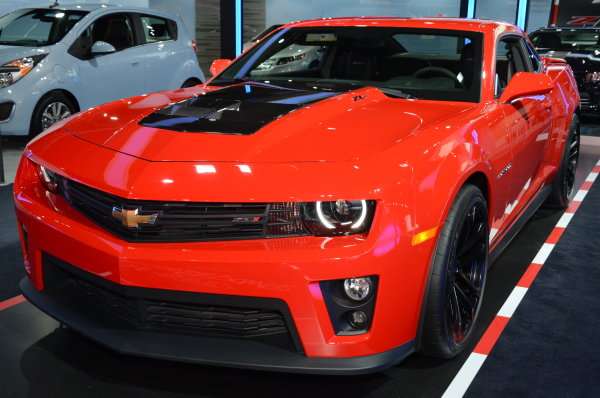 The 2016 Chevrolet Camaro May Struggle with the Hellcat Challenger

When the 6th generation Chevrolet Camaro debuts for the 2016 model year, General Motors will have their work cut out for them to have a muscle car that will compete with the 707 horsepower Dodge Challenger SRT Hellcat – and it is questionable whether GM will try at all since they probably wont want to trump the Corvette Z06.
Advertisement

When we learned a while back that the 2015 Dodge Challenger SRT Hellcat would pack at least 600 horsepower and at least 575lb-ft of torque, I expect that the 2016 Chevrolet Camaro would beat out the Hellcat with help from the Corvette Z06 LT4 engine with “at least” 626 horsepower and 635lb-ft of torque. We figured that an LT4 6th gen Camaro would be a lock for the strongest American muscle car when GM announced that the Z06 would pack 650 horsepower and 650lb-ft of torque. Unfortunately for GM, the new Hellcat Hemi V8 makes significantly more power than the Z06 so the same engine will not be enough to allow the 6th gen Camaro to overpower the 2015 Challenger Hellcat.

The Camaro Needs More Than the LT4
In order for General Motors to grab the title of offering the most powerful American muscle car, the engineers would have to design a 2016 Chevrolet Camaro that has more than 707 horsepower and 650lb-ft of torque. The LT4 delivers the same 650lb-ft of torque but “only” 650 horsepower so although the Camaro will likely be a little lighter and possibly just as fast with 57 less horsepower, being the most powerful is a big deal even if the less powerful model is faster in certain venues.

However, will they look to hold that record with the Camaro or the Corvette?

Chrysler is OK with the Hellcat Outselling the Viper
When the Chrysler Group designed the 2015 Dodge Challenger SRT Hellcat to have 707 horsepower and 650lb-ft of torque, they obviously knew that the brawny Mopar muscle car would offer a ton more power than their flagship SRT Viper. The issue is that the Viper isnt selling well and with a base price starting over $100k, the Viper is not for everyone. On the other hand, the 707 horsepower Challenger Hellcat will likely start in the $65-75k range, so it will almost certainly sell better than the Viper. Were the Viper selling very well, Chrysler would probably try to avoid doing anything that subtracted from Viper sales, but with Viper numbers already bottoming out – they would be just as happy to have those prospective buyers snatching up the 700+ horsepower Challenger.

GM Doesn’t Like the Camaro Challenging the Corvette
Over the past 30 years or so, General Motors has made it quite clear that they don’t want the Chevrolet Camaro interfering too much with Chevrolet Corvette sales. The Corvette is a high profit margin car and right now, it is selling like crazy while appealing to a different buyer than the Camaro. The next generation Camaro will likely have the same LT1 engine as the Corvette Stingray, but the added weight of the Camaro and lack of rear seat in the Corvette attract different buyers so there isn’t all that much direct competition. Those GM fans who want a supercar can buy the Corvette Z06 with a price in the $125k range and I suspect that it will be some time before GM looks to sell a Camaro that will knock the Challenger SRT Hellcat off of its pedestal.

rdsOLDschool wrote on July 9, 2014 - 10:14pm Permalink
This is a three way war now. The Dodge which has been taking the back seat for a while now in the muscle car segment has just open the pandora's box and has let the HP genie out. This is just the beginning. I mean the beginning for Dodge. They shocked all of us and they will do it again. They are no doubt already thinking of the next gen Hellcat anticipating that Ford and GM are going to fight back. What great times we live in to see such cars that has been the envy of the world for all these years. The HP war is just starting.
Oscar wrote on July 10, 2014 - 2:32pm Permalink
This is true but if GM does not want the Camaro to interfere with the Corvette, GM would have to make the new upcoming ZR1 (if it does debut) 750+ HP and a lot more Torque. And most of all, More AeroDynamics then the new Z06. Maybe even more wider wheels, Bigger Carbon Brembo Brakes, Larger Spoiler, Larger Tires, Wider Wheelbase, Racing Suspension and A Heavy Engine. Maybe a 7.0L-8.0L V8 or V10. That's what I think should be done. Also more Carbon Fiber would need to be used.
Auto Motive wrote on July 20, 2014 - 8:09am Permalink
Adding more weight is a negative when the current vette is heavier than a C4 95 vette by 200 lbs. GM can just add the larger 2.7 liter supercharger like the current ZR1 and get to 700+ hp without sacrificing weight. The next gen Camaro should be lighter maybe in the 3600-3700 lb range and the ZL1 could have the current Z06 LT4 engine with 650 hp. The hp wgt ratio on paper could take the ZL1 drag numbers past the hellcat. Very few of us vette guys race our cars and its a 95/5 swing . The hellcat sales will get some of the mustang and Camaro guys on board but brand loyalty is pretty strong in these segments. I understand that the hellcat will only have 1200 units available for the 2015 model year and added dealer premiums will come over $90k for the first rich buyers.
Patrick Rall wrote on September 9, 2014 - 2:25pm Permalink
There are no production constraints. Dodge will build as many as they can sell per the CEO of the brand. He came right out and said that those production limit numbers are false. Also, the allocation process will prevent dealerships from sending the price through the roof and sitting on cars.
Wayne wrote on July 10, 2014 - 6:07pm Permalink
Its time has come... MOPAR...
Victor Sandoval wrote on July 11, 2014 - 3:08am Permalink
Not sure what to think of the Hellcat. A big muscle car with 700 HP sounds great but I don't think it can handle the power. This might have been a better idea 5 years ago but these days it's becoming more and more important to have control of big power. That's why the new mustang is ditching the solid rear differential and why the Camaro Z/28 out performs the ZL1 despite having less HP. Unless Dodge can somehow tame all those horses, the new Hellcat will only be good in a drag race while the Camaro and Mustang leave the Chrysler in their dust everywhere else.
Matt wrote on July 11, 2014 - 8:16pm Permalink
Personally, I love the Hellcat possibilities. Think of this motor dropped in the next generation Ram SRT, Jeep SRT (AWD), etc. This power train has set the bar. Well done MOPAR.
Walter wrote on July 12, 2014 - 7:43am Permalink
Before we get crazy about the new Challanger lets keep in mind Dodge has been making fast cars for a long time. But there is more to making a fast car that goes fast in a straight line. The early Viper was a dangerous car. Its handling left much to be desired. So does the challanger. It falls short when compared to Gm and Ford pony cars in handling. Dodge still thinks putting a big engine in a small or mid sized car is always good. Wrong. The GTR has a V6 but will compete with the Hellcar because it has AWD and can turn a 10 plus second quater. As far as handling no challanger ( Built on the Mercedes sedan platform) will come close to the GTR, Corvette, ZL1 Camaro or other respected sports cars . Paying 75,000 for straight line performance is just plain silly. First of all if your looking to go stop light drag racing with such a car better think twice. Cars that go this fast will get you killed pretty easy in everday traffic. If your looking to go drag racing on a track remember there are plenty of old modified push rod V8s out there that are turning high 10s.
Matt wrote on September 23, 2014 - 11:46am Permalink
If GM made the LT4 flex fuel the numbers would probably beat the hellcat on E85 and it would require no special manufacturing by GM, just a retune. While the aftermarket enthusiasts have embraced flex fuel in performance vehicles, for some reason the manufacturers have not and only have it in trucks and passenger vehicles
Paul Rauch wrote on February 2, 2015 - 4:14pm Permalink
If the ZL1 Camaro doesn't have more HP for 2016, I'll be buying a HELLCAT for sure. Hate to give up my Chevy muscle loyalty but they're way behind! My hats off to the Dodge Boys for making a STAEMENT!
Robert Gildroy wrote on December 29, 2015 - 6:55pm Permalink
All the dodge boys have to do is build the hellcat like a real road runner.
William Holt III wrote on July 31, 2016 - 10:17pm Permalink
Hey i can still dream. beautiful!