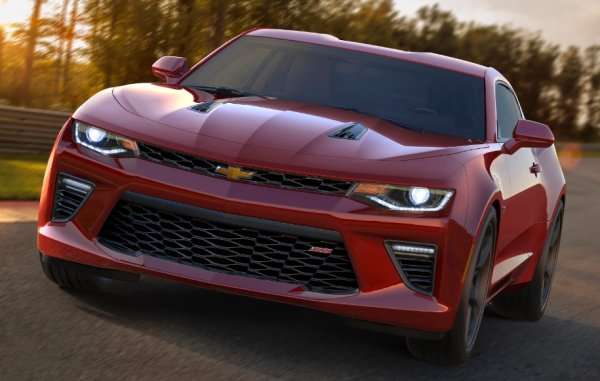 General Motors has announced the pricing for the 2016 Chevrolet Camaro and not surprisingly, the 6th gen Chevy muscle car costs more than the new Ford Mustang while in V8 form, the new Camaro SS costs a couple grand more than the outgoing models.
Advertisement

After weeks of speculation, we finally know how much it will cost to get into a 2016 Chevrolet Camaro. General Motors announced the initial pricing this morning and while they didn’t go into much detail, we do know the base price for the 2016 Camaro as well as the starting price for the LT1-powered Camaro SS.

2016 Camaro Pricing
So, what we learned today that the 2016 Chevrolet Camaro 1LT base model coupe with the 2.0L turbocharged 4-cylinder engine will start at $26,695 while the 2016 Camaro 1SS with the LT1 V8 starts at $37,295 (both of these prices include the $995 destination fee). Those are the only numbers offered by the automaker, so we still don’t know how much it will cost to add the 3.6L V6 to the Camaro LT, nor do we know how much it will add the 2LT, 2SS or automatic transmission to the various models. We also don’t know how much more the convertible will cost when it arrives.

The 2016 Camaro 1LT is more heavily appointed than the 2015 Camaro 1LT while also costing less, but getting into the least expensive 2016 Camaro will end up running you $1,995 more than it would have in 2015 simply because the bare bones LS package is gone.

However, it is an all-new model with more power, improved performance in every way and tons of new standard features, so the higher price for the 2016 Camaro SS doesn’t come as much of a surprise. The key reason that some people might be shocked by the effective price hikes for the 2016 model year is that the Camaro is significantly more expensive than the Ford Mustang – and while the Camaro might have more power, the big price gap between the two most popular American muscle cars could send some buyers to the Mustang.

Camaro VS Mustang
The 2016 Ford Mustang V6 fastback (base model) has a starting price of $24,700, so the 2016 Camaro in its most basic form starts around $2,000 more than the Mustang. Even if you step up to the EcoBoost Mustang with 310hp and 320lb-ft of torque, the Ford only costs $26,200 while the base Camaro starts at $26,695 – so the Mustang has a major advantage in performance and price when it comes to the less expensive, more efficient models.

This big price difference could play a big role in the muscle car sales race, but if you consider the fact that the Camaro has been more expensive – and better selling – than the Mustang since 2010, it might not be a problem for the 2016 model year.