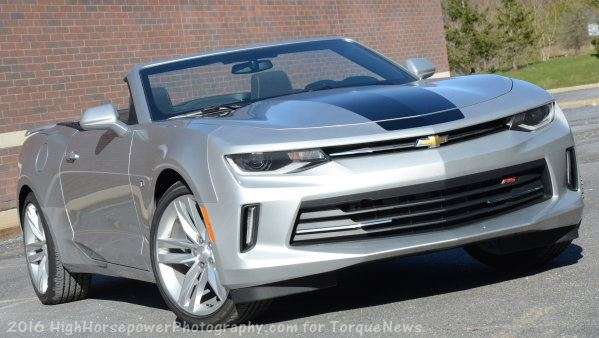 The pricing has been announced for the 2016 Chevrolet Camaro in the United Kingdom, and even though the new GM muscle car isn’t right hand drive and the new Ford Mustang is – the Camaro still costs more than the Mustang in both 4- and 8-cylinder form.
Advertisement

While General Motors has not yet created a right-hand drive Chevrolet Camaro for the UK market, the 6th gen Camaro will soon go on sale in Britain and other parts of Europe. Surprisingly, when the new Camaro arrives in dealerships around the UK, it will cost quite a bit more than the new Ford Mustang in both turbocharged 4-cylinder form and V8 form, even though the Mustang does feature the preferred right-drive layout.

2016 Camaro UK Pricing
When the 2016 Chevrolet Camaro reaches dealers in the United Kingdom later this year, it will be offered as either a coupe or convertible and with one of three drivetrains. The base model drivetrain is the turbocharged 2.0L 4-cylinder engine mated to an 8-speed automatic transmission, followed by the 6.2L LT1 mated to a 6-speed manual transmission and finally that same V8 mated to the 8-speed automatic transmission. The 6-speed manual is not available with the turbocharged 4-cylinder, which I think is a pretty odd choice, but the combination of the 2.0L turbo-4 with the 8-speed auto will likely be the most efficient American muscle car sold in the UK.

Camaro Compared to Mustang
The Ford Mustang has proven to be incredibly popular in the UK since being introduced with the new right hand drive configuration, but GM opted not to challenge the Mustang with a right-drive Camaro. Instead, GM will continue to offer the same left hand drive Camaros that we get in the US in the UK, where they drive on the “other” side of the road. It was an odd decision for General Motors and it will almost certainly guarantee that the Ford Mustang will walk away with the title of the bestselling muscle car in the world.

Even with that in mind General Motors wants to keep their fans in the UK happy, so they will offer the new Camaro in similar turbo-4 and V8 form to the Ford Mustang. The 4-cylinder Camaro is considerably less powerful than the turbo-4 Mustang, but the Camaro should have the advantage in fuel economy and with the high price of gasoline in the UK, the fuel economy numbers could play a bigger part than power among base model muscle cars.

The pricing schedules for the Camaro and Mustang in the UK are listed blow with US Dollars in brackets.