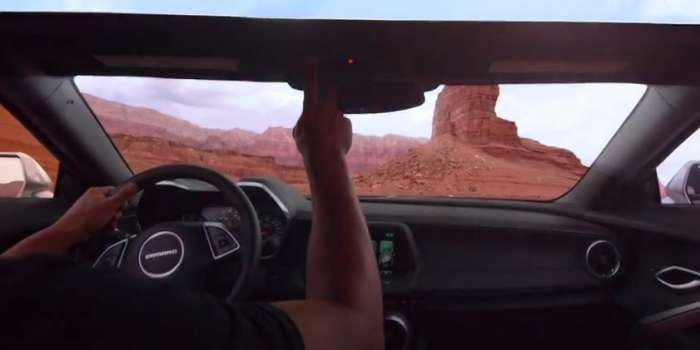 General Motors really hasn’t had much to say about the arrival of the 2016 Chevrolet Camaro Convertible, but a new 15 second video on the official Chevrolet YouTube page suggests that the new drop top muscle car will debut this Wednesday – we just don’t know when or where or how.
Advertisement

When the 2016 Chevrolet Camaro debuted last month at a private event on Detroit’s Belle Isle, the next generation muscle car was on display in both base and SS form, with the new turbocharged 4-cylinder, the 3.6L V6 and the LT1 V8. That event answered almost all of our questions about the 6th generation Camaro, but the debut of the newest American muscle car opened up a handful of new questions. Most notably, Camaro fans wanted to know about a new super-Camaro such as the next ZL1 or Z28 and, more importantly, they wanted to know about the 2016 Camaro Convertible. However, as has been the case with the debut of the C7 Corvette and the 5th generation Camaro, the initial debut was a coupe-only affair with no mention of the new convertible.

Rumors quickly began to travel around the internet about when and where the 2016 Camaro Convertible would debut, but those rumors have all seemingly been put to rest with this new video showing the new Camaro dropping its top followed by what we would expect is the debut date of the new Convertible – 6/24/15. That is this Wednesday, so those prospective 2016 Camaro buyers who demand a convertible will soon have a good look at their next new car.

No-Stop Drop Top
To many people, this video of the 2016 Camaro Convertible lowering its top really doesn’t including anything all that important, but there is one vital detail in this short video that could make a big impact on the automotive world as a whole. If you watch the video carefully, the Camaro Convertible appears to be driving down a desert road when the driver reaches up and opens the top – while moving.

In case you aren’t clear as to what is significant here, take note of the fact that the 2016 Camaro Convertible is cruising along when the top goes down. The vast majority of convertibles sold in the USA have a safety feature that prevents the top from being retracted when the car is moving at speed. With many cars, you have to be completely stationary while others will let you drive at very low speeds when putting the top down, but every convertible that I’ve tested will not let you put the top up or down when driving at a normal speed.

The automakers set convertibles up this way so that people don’t try to open the top when going 60 miles an hour, as the sudden wind force against the top would do massive damage to the moving roof. The problem with this is that in most cases, you cannot put the top down without pulling off of the road, as most tops retract too slowly to pull them down when you are stopped in traffic and if the top is retracting when the car begins to move, most cars will automatically put the top back up.
In short, the 2016 Camaro Convertible appears to have the quickest and easiest top to drop, especially if you really can put the top down while traveling at normal speeds.

Why Does This Really Matter?
In all reality, being able to put the top down in your 2016 Camaro Convertible while driving down the road is little more than a convenient addition that may not matter to most buyers. Where this really makes a difference is in marketing, as the Camaro might have a feature/capability that no other convertible sold in America has.

A few years back, Mazda crowned the MX5 (that is what they call the Miata now) the fastest convertible in the world. To determine this, Mazda set up a quarter mile drag race between the MX5, the Lamborghini Gallardo, the Ford Mustang, the Chevrolet Corvette, the Porsche 911 and the Lotus Elise. Just as the race is set to begin, it begins to rain and of course, the competitors cannot race without first putting up their tops. The Miata was the quickest to get the top up and head down the track, with the Porsche being the next closest some 5 seconds later. As a result of the quicker convertible top, the lil Mazda was able to win the race and grab the title of the world’s fastest convertible top.

Would the 2016 Camaro have been involved in this race, it could have put the top up during the blast down the track, making it the fastest convertible top in the world.

In any event, check out the video below of the 2016 Camaro Convertible and stay tuned for TorqueNews for continuing coverage of the 6th gen Camaro debut.