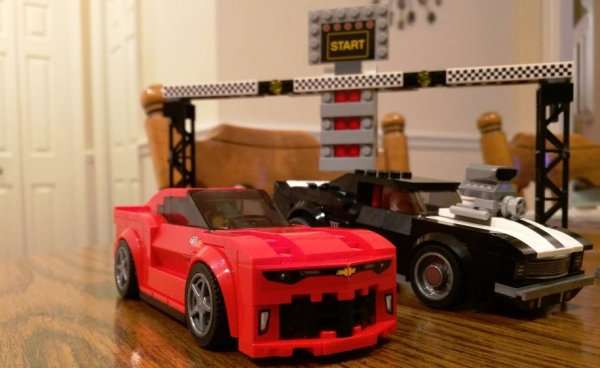 2016 Camaro Comes to the Lego World alongside a Classic

If you love the 2016 Chevrolet Camaro and you want to build one of your own to keep on your desk at work, the Lego Speed Champions line has you covered with a new two-car set that includes a DIY 6th gen Camaro and a heavily modified-looking small scale 1969 Camaro.
Advertisement

Since the 2016 Chevrolet Camaro was introduced, I haven’t seen a great many toy versions of the 6th gen muscle car, but that changes with the arrival of the Lego Speed Champions Camaro Drag Race set. I have not been able to find this set on the official Lego website, but I spoke with Brian Meissen – who owns several Camaros, runs MIFBody.com and likes Camaro collectables. Brian provided the image above of the Camaro Drag Race set completed, with the drivers in each car, a flagman and the starting line apparatus with an integrated Christmas tree.

Lego Speed Champions Camaro Drag Race
The New Camaro Drag Race set from the Lego Speed Champions collection is part number 75874 and online prices start around $30. Brian got his from the Toys’R’Us website for that price, but other websites have the kit for slightly higher prices. There are also some new Camaro Lego sets on eBay with much higher prices, but before turning to the auction set, Camaro fans who want this new dueling Camaro package should check the likes of Sears.com, Amazon, etc.

This Camaro Drag Race set is a 445 brick package, and as mentioned above, it includes a red 2016 Camaro, a black 1969 Camaro, a pair of drivers in Chevy-branded race suits, a flagman and the starting line setup with the ability to change from red to green. The 2016 Camaro is designed to look like a stock production model while the 1969 Camaro has been modified for proper racing duties – with big, fat tires out back and a blower sticking up through the hood. (Note: Brian modified the supercharger on his 1969 Lego Camaro, so those of you who buy the kit - your '69 Camaro engine will look a bit different.)

While the square nature of Lego bricks make it tough to replicate the curves of the Camaro – both 2016 and 1969 – the decals that come with the kit and the overall shape of these toys leave little question that they are a classic and modern Chevrolet Camaro. On the 2016 Camaro, decals add the fender badges along with the front and rear lighting designs while the 1969 Camaro gets a classic Camaro logo decal on the back and the familiar 1st gen Camaro grille.