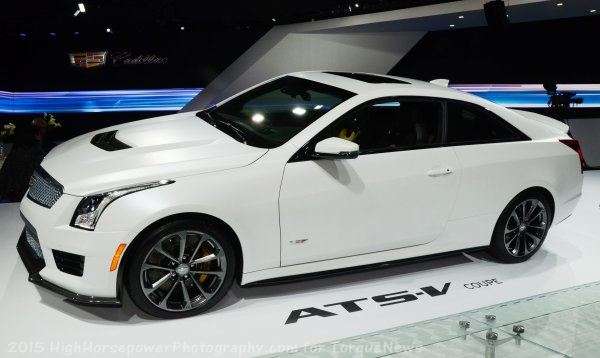 The 2016 Cadillac ATS-V Gets a Few More Ponies, Better Performance

The 2016 Cadillac ATS-V hasn’t reached owners yet, but General Motors has already announced an increase in horsepower for the high performance luxury sport sedan with the official SAE rating of 464 horsepower - in addition to boasting better performance numbers than originally expected.
Advertisement

It has become very common for an automaker to introduce a performance model with estimate power figures, but when the 2016 Cadillac ATS-V specs were announced last month, the figures of 455 horsepower and 445lb-ft of torque seemed pretty official. Those figures would allow the ATS-V to dash from 0-60 in just 3.9 seconds while reaching a top speed of 185 miles per hour. However, now that the official SAE ratings for the 2016 ATS-V have been announced, the smallest of the high output Cadillacs picked up 9 extra horsepower and got a little quicker in both performance metrics.

More Horsepower, Better Performance
The 2016 Cadillac ATS-V is powered by a new twin turbocharged 3.6L V6 that officially delivers 464 horsepower and 444lb-ft of torque. This marks an increase of 9 horsepower and a decrease of 1lb-ft of torque from the first official numbers back in February. In case you are worried about that loss in torque, don’t be – as getting from a stop to 60 miles per hour takes just 3.8 seconds (rather than the originally stated 3.9) while the official top speed of 189 miles per hour is 4 better than what was initially quoted by GM.

In other words, before the new ATS-V ever reached the showroom, it got more powerful, quicker and faster so while this new compact super Caddy sounded fantastic when it was introduced – it has gotten even better.

Bigger Advantage Over the Competition
The compact performance luxury segment has long been dominated by the likes of the BMW M3 (and more recently, the M4), so that is the biggest competitor for the new Cadillac ATS-V. Those two BMWs are powered by the same twin turbo V6 with 425 horsepower and 406lb-ft of torque, which allows the M3 and M4 to reach a top speed of 156 miles hour, while hitting 60 in 3.9 seconds from a stop. The less expensive ATS-V coupe and sedan will both pack significantly more horsepower and torque while seemingly being quicker and faster than the top German competition. The Cadillac also has a slightly lower price, starting at just $61,460 for the sedan and $63,660 for the coupe, so the new ATS-V seems to have all of the key components needed to defeat the best.

Another key competitor for the 2016 Cadillac ATS-V is the new Lexus RCF, which has a 5.0L V8 with 467 horsepower and 389lb-ft of torque. The Lexus is a bit bigger than the Cadillac so when combined with the massive disadvantage in torque, it takes the RCF 4.4 seconds to get to 60 while having a top speed of just 167 miles per hour. So while the Cadillac has less horsepower, it is quite a bit quicker and faster.

In other words, the Cadillac ATS-V has a very real chance of making a big splash in the luxury performance compact segment – furthering the climb of the American luxury brand.