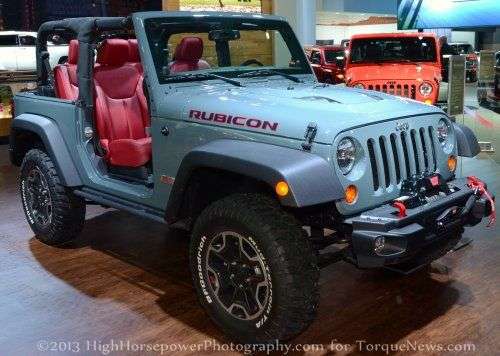 Jeep lovers in the US have long been calling for a diesel powered Trail Rated SUV and the refreshed 2015 Jeep Wrangler could be the next vehicle from the popular brand to pack diesel power – provided that the new EcoDiesel in the 2014 Jeep Grand Cherokee is well received by American buyers.
Advertisement

People who love Jeeps love tough vehicles and in terms of engines, it doesn’t get much tougher than a turbo diesel so for many years, diehard Jeep fans have been clamoring for a Jeep Wrangler with a diesel engine option. As the American auto industry has slowly become more willing to accept diesel powered passenger vehicles, the Chrysler Group used the debut of the sexy new 2014 Jeep Grand Cherokee to introduce the company’s new EcoDiesel. According to Jeep President Mike Manley, the Jeep Wrangler could be the next brand vehicle to feature this powerful, efficient oil burning technology.

While speaking with Ward’s Auto, Manley stated that the Wrangler is “on the radar” to receive a diesel engine option. He went on to explain that he expects the new EcoDiesel Grand Cherokee to show that there is a growing interest in clean diesel technology for passenger vehicles and - provided that the level of interest is high enough – the Wrangler could be the next Trail Rated vehicle to receive a similar engine option. The EcoDiesel Grand Cherokee is due out later this year so it leaves us wondering just how long the Chrysler Group will wait before introducing a Wrangler diesel package.

Well, the Jeep Wrangler is slated for a full redo for the 2015 or 2016 model year and Manley believes that would be the ideal time to introduce the Wrangler diesel. There is no better time to introduce a new engine option than with the launch of a new generation of the model (just like what they did with the new Grand Cherokee) and with the growth of diesel passenger vehicles sales in the US – it would make good sense for Jeep to offer their two best vehicles with this powerful, efficient and clean diesel technology.

Now that there is a good chance that the 2015 Jeep Wrangler will have a diesel option, the question shifts to just what engine the Wrangler would feature. The 2014 Jeep Grand Cherokee and 2013 Ram 1500 will both be offered with the new 3.0L V6 turbo diesel engine and should Chrysler go with that engine; the new diesel Wrangler would likely amount to the most powerful Wrangler ever. Currently, the most powerful Wrangler engine is the Pentastar V6 with 285 horsepower and 265lb-ft of torque. The new 3.0L EcoDiesel V6 in the Grand Cherokee offers 240 horsepower and 420lb-ft of torque so there is no doubt that the EcoDiesel would make for one seriously powerful and seriously fun off road monster. More importantly, the EcoDiesel would likely offer incredible fuel economy in the lightweight Wrangler while also affording the 2015 Wrangler more towing capabilities than ever before.

The next possible engine for the 2015 Jeep Wrangler diesel model would be the new 3.0L inline 4 cylinder being utilitzed in the upcoming 2014 Ram ProMaster commercial van. This engine offers only 174 horsepower and 295lb-ft of torque but the 4 cylinder construction may offer weight savings over the V6 EcoDiesel that would allow the Wrangler to handle itself a little better on road and off.

Finally, the Jeep Wrangler is currently offered with a diesel engine in Europe in the form of a 2.8L 4 cylinder mill built by VM Motori that produces 197 horsepower and 340lb-ft of torque so this engine falls between the two diesels already slated for US use. Like the ProMaster’s 3.0L 4 cylinder engine, this VM Motori diesel could offer weight savings over the 3.0L V6 turbo diesel from the Grand Cherokee and Ram 1500. Plus, the company already knows that this motor will fit nicely into the Wrangler engine bay. That is, of course, ahead of the 2015 or 2016 refresh of the Wrangler that could change everything.

Unfortunately with the expected arrival date of the Jeep Wrangler diesel model being at least two years away, it could be some time before we get any real specs but who knows – as big Grand Cherokee and Ram 1500 EcoDiesel sales could influence the company to be more forthcoming with details of the Wrangler diesel ahead of the 2015 debut.