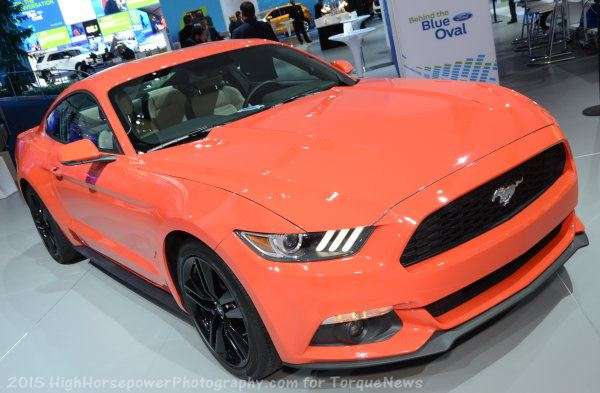 The dealership rollout of the 2015 Ford Mustang is complete, giving pretty much every prospective buyer in the US a chance to walk into their local Ford dealership and drive out in a next generation Mustang – thus allowing the redesigned pony car to destroy the competition in January 2015 sales.
Advertisement

The 2015 Ford Mustang has been in dealerships around the country for a few months now, but January marks the first month where the official sales numbers are comprised entirely of next generation models. The Mustang had its biggest month since May in December 2014, but due to the fact that the Chevrolet Camaro tied up the 2014 muscle car sales title in December, the Mustang’s strong month to end 2014 was lost.

2015 Mustang Continues to Move
Ford Motor Company sold 8,694 examples of the 2015 Mustang in January 2015, which is a decline from the 9,511 Mustangs sold in December 2014, but considering how hard many areas of the US were pummeled with snow last month, cars like the Mustang were far from the first choice for many new car buyers in January. Even with the winter weather creating an unpleasant situation for new Mustang buyers, Ford still managed to sell more pony cars in January 2015 than they did in January 2013 and January 2014 combined.

Most areas that get heavy snowfall in the winter got lucky in December, but many areas got their hardest snowstorms of the 2014-2015 winter season last month. This caused a big drop in sporty car sales, but the Mustang still did very well. The Camaro dropped from 6,628 in December to 4,991 in January while the Dodge Challenger – which is riding a new model wave of its own – saw a much smaller drop of 4,938 in December to 4,592 in January.

The fact that the Camaro fell so far allowed the Mustang to crush the Camaro and take a big early lead in the 2015 annual sales race.

Rough Month for the Camaro
January is usually a bad month for sports car sales and this was true for the Chevrolet Camaro in the first stanza of 2015, but the bowtie-clad muscle car still managed to turn in comparable numbers to both 2013 and 2014. It was a predictable month of bad sales, but with the 2015 Mustang helping Ford to post big numbers in January, the sales dip for the Camaro was a painful one. This marks the first time in the past four years where the Camaro will need to climb out of a hole starting in the first month of the year in order to claim the annual muscle car sales title.

The Camaro has won an impressive 5 straight annual sales titles, but we knew that 2015 would be the toughest challenge yet – and these January sales figures confirm the battle that we all expected.

We are likely to see Chevrolet Camaro sales numbers rebound over the next few months as winter fades, but the continued popularity of the new 2015 Ford Mustang and the new 2015 Dodge Challenger will force the Chevy to fight for every monthly sales title of the year.

So far, it is Mustang 1, Camaro 0 – and this battle is only likely to heat up with the weather.