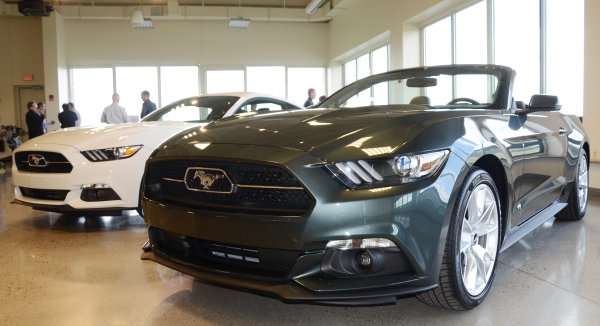 The sales boom for the 2015 Ford Mustang continued in April 2015, posting the best sales figures in almost a decade while once again comfortably outselling both the Chevrolet Camaro and the Dodge Challenger – and Mustang sales are likely to continue to improve as we get into the summer months.
Advertisement

All of the people who insisted that the new face of the 2015 Ford Mustang would prevent it from succeeding in the United States are clearly incorrect, as the Mustang posted incredible sales numbers in April 2015. The Chevrolet Camaro posted growth over the past two months and the Dodge Challenger posted record sales figures in April 2015, but the Mustang still beat the Camaro and the Challenger in April sales.

April 2015 Mustang Sales
With a stunning total of 13,144 units sold last month, Ford sold more Mustangs than I have ever seen in my 4 years of covering the segment sales race and this comes after the Mustang posted a similar record in March when “only” 12,663 units were sold. 13,144 Mustangs sold in April marks an increase of 82% over the same month last year, when only the 2014 Mustang was available – clearly showing the popularity of the next generation models.

Back to back monster sales months for the 2015 Ford Mustang have led to very strong sales numbers through the first third of the calendar year, with a whopping 42,955 units sold thus far. Through all of 2014, Ford sold 82,635 Mustang coupes and convertibles and while we are only 4 months into 2015, the Mustang has already sold 52% of the total from all of 2014.

At this rate, Ford is on pace to sale over 128,000 Mustangs in 2015, but I don’t think that the current average of 10,739 units per month will continue all year long. However, the Mustang has a very real chance of topping 100,000 units sold in 2015. To do so, Ford needs to average just 7,130 units per month from May through December and during the 2014 calendar year, Ford averaged 6,880 Mustangs sold per month with just the previous generation models available.

Camaro and Challenger Sales
The Chevrolet Camaro posted another lackluster month in April 2015, moving just 6,909 units, but that was enough for the Chevy muscle car to pull back into the second spot in segment sales after trailing the Mustang and the Challenger in March. Camaro sales are solid, but they are surely down a bit from where they would be if not for a new generation model on its way.

On the other hand, things are going great for the Dodge Challenger, as the Mopar muscle car continues to enjoy the sales boom of both an exterior refresh and the arrival of the Hellcat models with 707 horsepower. Dodge sold 6,771 Challengers last month, which is a new sales record for the modern era of the Challenger.

Mustang Versus the Competition
While some critics will insist that these strong sales are due to the new 2015 Mustang and that same boom is to be expected of any brand new sports car, so I dug up the sales figures from the Chevrolet Camaro in its first year of existence in modern form. For those unsure, the Camaro was introduced for the 2010 model year in the summer of 2009 after the Camaro had been out of production since 2003. GM fans were frothing at the bit to finally have their muscle car back and when the Camaro arrived, it instantly became the bestselling performance car in America.

However, during the first 12 months of sales for the 5th generation Camaro, the best month was June 2009, when 9,320 Chevy muscle cars were sold. At no point in the first year of sales did the Camaro top 10,000 units and in the past four years in which I’ve been covering the muscle car segment sales, Camaro has only topped 10,000 units once – the Mustang has topped 12,000 each of the last two months.

The big test will come when the 2016 Chevrolet Camaro hits the market later this year. It will be interesting to see if the new Camaro can match the insane sales figures of the new Mustang.