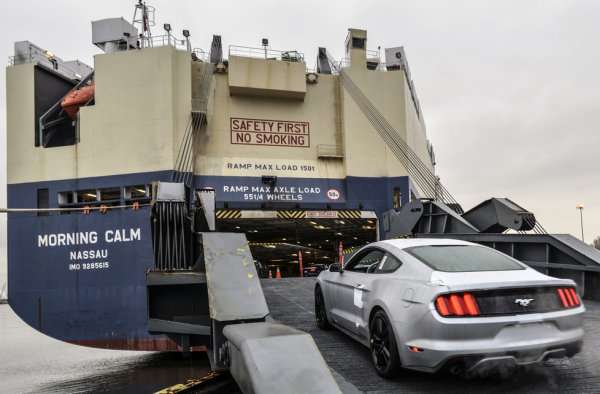 Ford Motor Company has announced that the first batch of 2015 Ford Mustang models destined for dealerships in Asia, Australia and Europe are nearing delivery to these foreign ports – a move which will almost certainly help the Mustang because the bestselling muscle car in the world.
Advertisement

The 2015 Ford Mustang is special to American muscle car fans for a variety of reasons, but for those Ford fans outside of North America, this new S550 platform is especially important. This new Mustang is the first to be designed with plans of major sales outside of North America, including right hand drive and one of the most efficient engines ever offered in a Mustang.

“Henry Ford exported the sixth Model A assembled in 1903 and we continue this legacy today,” said Joe Hinrichs, Ford president of The Americas. “The success of our One Ford plan presents opportunities for growth in global markets. Exporting Ford and Lincoln vehicles to Asia Pacific and beyond is an important part of Ford’s global growth story. Mustang is just one more example of the international demand for Ford cars and trucks.”

We reported a few weeks back that the 2015 Mustang was set to hit China last week and now, more models are heading to foreign markets around the world.

2015 Mustang Plans Global Conquest
The Chevrolet Camaro has been available in markets outside of North America for the past few years, but those are simply North American cars sold in other markets. Most importantly, the Camaro in these overseas markets are not offered with a fuel friendly engine or right hand drive. On the other hand, while the Ford Mustang GT with the powerful 5.0L V8 will be sold as either a left or right hand drive model (depending on the market’s needs), folks in other markets can also buy the Mustang EcoBoost. This fuel friendly 4-cylinder model will allow foreign Mustang fans to get into a 2015 model with a lower price point and, for those who aren’t so concerned with big power, the EcoBoost offers incredible fuel economy while still maintaining a strong level of performance.

Made in Michigan, USA
All of the 2015 Ford Mustang fastbacks and convertibles are built at the Ford Flat Rock facility in Michigan, but the cars planned for export are left not-quite-finished when they are shipped out of Flat Rock. These vehicles are completed at the various ports to allow them to conform to the requirements of these different countries. Also, the vehicles each receive their country-specific owner’s literature and the vehicle labels around the car.

“Preparing these vehicles for shipment to their final destination is critical to satisfying both customer and regulatory requirements for our markets around the world,” said Gerald Schoenle, director, Ford Trading Company. “We want our customers globally to know that their Ford vehicles will meet emissions, safety and road-worthiness requirements.”

While the Chevrolet Camaro claimed its 5th straight muscle car sales title in 2014, the growth of Mustang sales in the US with the new models will make for a tough battle on the home front for the GM muscle car. Even if the Camaro manages to hold off the Mustang throughout 2015 in the US, Mustang sales in these foreign markets should help make the 2015 Mustang the bestselling muscle car in the world.