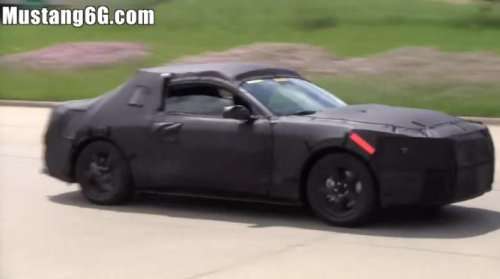 Spyshots of the next generation 2015 Ford Mustang have been popping up all over the place but a new video on YouTube shows what is unquestionably a next generation Mustang test car out on the open road somewhere in the Metro Detroit area and while the car is covered in thick camo – we get a few parting sound clips of the new Mustang along with a look at features like the front and rear brakes.
Advertisement

The 2015 Ford Mustang, referred to internally as the S550, is expected to show its face sometime in the next year so it should come as no surprise that these heavily masked vehicles are already being heavily tested in the Detroit area. Little concrete information is known about the 2015 Mustang shy of the fact that it will feature some design cues from the Ford Evos Concept and from what little we have seen thus far in spy shots – it looks as though the 2015 Stang will have a front end with narrow, elongated headlights like the Evos Concept.

This video, courtesy of the folks at Mustang6G.com, shows a 2015 Ford Mustang test mule out on the open road. The videographer was good enough to follow the car around for a while, catching the future muscle car from a variety of angles and even managing to catch the exhaust note on film for us all to enjoy. Unfortunately, like the other vehicles caught by the automotive paparazzis cameras, this car is heavily camouflaged to ensure that we really cant see any of the lines of the new body.

In fact, if you look at the slow motion portion of the video about 2/3rds of the way through, it appears that not only is the 2015 Mustang test car covered in the familiar black cladding but it also appears as though the surfaces under the black skin has been padded to prevent any of the body lines from showing through the camo. It also appears that the black camo across the rear portion of the roof might be padded up to hide the true roofline – although that could also just be a symptom of the wind blowing through the camo at speeds. Honestly, based on the length of the “overhang” in ahead of the front wheels, I wouldn’t be surprised if there was also some padding up front to protect the identity of the new nose.

What we do get a good look at in this video of the 2015 Ford Mustang is the braking system that appears to be quite a bit beefier than the standard brakes on the current 2014 Mustang. The rear brakes don’t appear to be anything special but the front binders definitely look like a higher end package – possibly from someone like Brembo – along with some pretty big front rotors. Also, while it is hard to tell with traffic around (including a current Mustang GT test car), the clips where the 2015 Mustang is driving away are accompanied by an exhaust tone that I would guess is a very muffled version of the 5.0L Coyote V8 of the Mustang GT.

It could be that the V8 sound that I am hearing is coming from another vehicle in the video but from what I can see and hear – I would guess that this is a camo’d 2015 Mustang GT. I don’t think that the production model will sound like the test mule captured on this video but considering the low profile nature of these test cars, I would imagine that they arent too keen on having a loud, rumbling exhaust…at least not in these stages of testing. However, the V8 exhaust tone combined with the big brakes would lead me to believe that this is indeed the next Mustang GT.

Image above is captured from the Mustang6G.com video shown here.