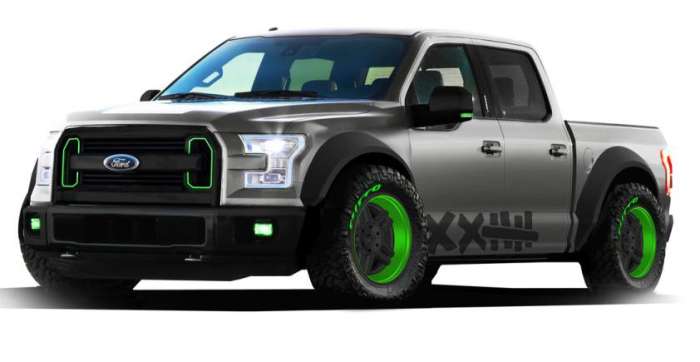 The 2015 Ford F150 will almost surely be one of the most popular trucks at the 2014 SEMA Show and today we have our first look at two of the new half ton trucks that will help fill the massive Ford Motor Company at the annual Las Vegas convention - with design help from “action sports” celebrities Vaughn Gittin Jr and Brian Deegan.
Advertisement

The SEMA Show in Las Vegas is the biggest event in the global auto industry and each year, the people who run the SEMA Show pick the “Hottest Truck” of the show - an award that the Ford F150 has won each of the past four years. The 2015 Ford F150 has to be among the frontrunners for that honor and these two super modified half ton pickups will headline what will almost certainly be a huge number of 2015 models that will help Ford Motor Company to take their shot at a 5th straight Hottest Truck award.

To help customize a couple of the 2015 F150 pickups in the huge Ford SEMA display, the Motor Company turned to two of their well known racers in the world of “action sports”. Ford tapped drift champion and Ford Mustang driver Vaughn Gittin Jr to design one truck while Global RallyCross and offroad truck racer Brian Deegan offered his input on the second next generation F150.

Vaughn Gittin Jr. Street Truck
First up, we have the Vaughn Gittin Jr. street truck, which takes a very unique approach to customizing the 2015 Ford F150 (shown above). Most of the F150 trucks on the SEMA Show floor are either designed for on-road performance or off-road performance, but this truck has been designed to cover pretty much anything. Details are limited, but we know that Gittin’s F150 will feature a trick suspension setup that will give this truck 12 inches of travel thanks to innovations from Kibbetech and King shocks, while an Air Lift Performance air ride system will allow this truck to perform well on the tarmac and in the dirt.

“I love trucks, and to build one that has daily on- and off-road capabilities, as well as drifting and jumping capabilities is something I have always wanted to do,” said Gittin. “I am really pumped to get crazy in this F-150 at SEMA this year.”

On top of the serious sport suspension setup, Gittin’s 2015 Ford F150 will have a very unique look with some big, beefy tires tucked under huge wheel flares on the outside while 5 Recaro bucket seats will provide that race ready feel on the inside.

Deegan 38 F150
The second 2015 Ford F150 teased today is named the Deegan 38, and it has been customized by truck and rally car racer Brian Deegan…who generally races while wearing the #38. Deegan has made quite a name for himself in the world off off-road truck racing, so it should come as no surprise that his F150 SEMA project looks like a truck built to conquer the roughest terrains at high speed. The Deegan 38 2015 F150 started life as a run of the mill SuperCab pickup powered by the twin turbo 3.5L EcoBoost V6. With help from companies including Addictive Desert Designs, Mickey Thompson Performance, FOX Racing Shox, KC Hilites, Mastercraft Safety, Rockford Fosgate, Full-Race Motorsports, Leading Edge Tuning, ProEFI and SCT Performance, Deegan transformed this F150 from the bestselling truck in America to a truck that will comfortably go head to head with any truck in the world’s roughest terrain - and it will likely win hands down.

“This F-150 should inspire the vast off-road, extreme-lifestyle-loving fan base to push the possibilities of the kick-ass new 2015 F-150 and the awesome 3.5-liter EcoBoost engine,” said Deegan

The 2014 SEMA Show opens during the first week of November so until then, these images and few details are all that we have to go on, but there is a good chance that these trucks will become even more impressive once we know all that there is to know. There is also a good chance that these two F150 pickups will help Ford take home their 5th straight Hottest Truck of SEMA title.

Chris Ross wrote on October 20, 2014 - 8:59pm Permalink
I can assure you that the Deegan 38 truck is more impressive than what you know here. We are super excited to reveal the truck at SEMA, and even more excited to blow everybody away with the performance of the truck. Let's just discuss that we are going to have in excess of 600 WHP with the 3.5L EcoBoost.