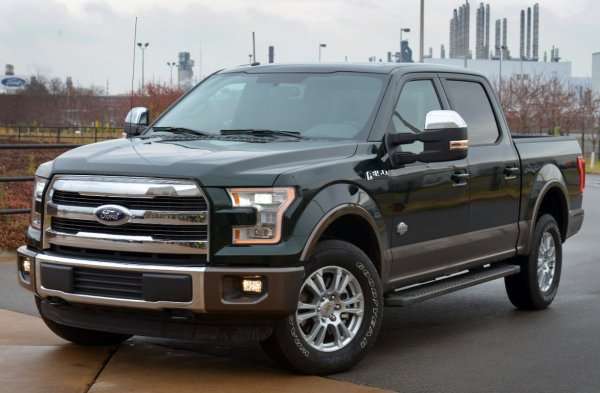 Ford Motor Company has issued a voluntary recall of roughly 37,000 examples of the 2015 F150 pickup over a concern that the adaptive cruise control feature could be incorrectly calibrated and as a result, the system could cause the vehicle to brake suddenly when passing a particularly shiny vehicle – potentially leading to an accident.
Advertisement

Adaptive cruise control is a very cool piece of modern automotive technology and it has become a common feature of many new vehicles, including the premium trimlines of the 2015 Ford F150. Unfortunately, as can often be the case with new technology, there is a programming issue causing the adaptive cruise control to work incorrectly and should the system fail at highway speeds, the truck could suddenly slow down for no apparent reason.

F150 Adaptive Cruise Control at Work
If you have never driven a vehicle with an adaptive cruise control system like the one in the 2015 Ford F150, here is a quick rundown of how it works.

First, the F150 adaptive cruise control works in much the same way as the speed control system in the 1990 F150. You turn the system on with one button, set the speed with another button and if you are the only vehicle on the highway, the system allows you to maintain speed without holding your foot on the gas pedal. There are other buttons to increase and decrease the cruising speed and, just like a non-adaptive system, tapping the brakes cancels the cruise setting.

Where an adaptive cruise control system differs from an old-school setup is when you come up on other vehicles in your 2015 Ford F150 or another similarly equipped vehicle. Rather than having to hit the brakes to avoid cruising into the back of a slower moving vehicle, adaptive cruise control uses a radar system to detect other vehicles in your path and, using a preset distance between yourself and other vehicles, the F150 can adjust the cruising speed without any actions by the driver.

For example, if you are cruising in your 2015 F150 in the fast lane and a slower moving vehicle swings out in front of you, your truck will automatically slow down to pace that other vehicle. When that vehicle moves back into the right lane, the F150 will pick back up to the selected cruising speed. Also, should a vehicle stop in front of your F150, the adaptive cruise control system will work with the crash avoidance gadgets to prevent your truck from slamming into the other vehicle.

The 2015 F150 Recall Issue
It is a great feature that makes long drives much more comfortable, but in roughly 37,000 new 2015 F150 pickups in the USA, the radar system is calibrated incorrectly. As a result the system could recognize a particularly bright, shiny vehicle – like a tractor trailer with a bright white or silver cargo box – as a vehicle in your lane. When that happens, the system can cause the truck to slow dramatically and it should go without saying that suddenly slowing way down while cruising on the highway could lead to an accident.

The good news is that Ford has only received one report of an accident being caused by this problem in the 2015 F150 and no one was injured as a result of that accident. Better yet, the fix for this recall is as simple as a reflash of the computer system, so there is no need to wait for new parts before being able to get your new F150 fixed. Of course, this work will be performed at no cost to the owners and it should be a nice, quick recall repair.

The vehicles affected in this recall are 2015 Ford F150 pickups built at the Dearborn truck plant between March 18, 2014 and August 5, 2015, and at the Kansas City Assembly Plant from August 11, 2014 through August 6, 2015. That is the entire run of the 2015 F150 pickups, but the actual recall number is low since only the most heavily loaded trucks have this technology.