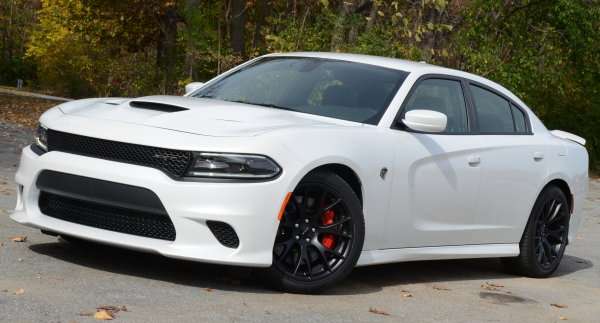 First off, the 2015 Dodge Charger SRT Hellcat production numbers discussed below come from the enthusiasts at Hellcat.org, so like the Hellcat Challenger production figures from yesterday’s piece, these numbers are not official. However, this list has been compiled by people with the types of access needed to acquire these figures, so even if these numbers aren’t 100% accurate – I believe that they are very close. In other words, an official report from the Chrysler Group (should we see one) might have some different numbers, but I would expect the figures below to be accurate enough that any differences are immaterial.

With that aside, onto the good stuff.

2015 Dodge Charger SRT Hellcat Production
According to the folks at Hellcat.org, the Chrysler Group built 1,334 examples of the Dodge Charger SRT Hellcat for the 2015 model year. Since the manual transmission is not offered in the high performance sedan, all of these cars came with the quick shifting 8-speed automatic transmission and, of course, the supercharged 6.2L Hemi that delivers 707 horsepower and 650lb-ft of torque.

The most popular exterior color for the Hellcat Charger was Phantom Black with 271 units sold and Pitch Black was second with 214 examples built for 2015. Bright White was third with 191 units and Ivory Tri-Coat was fourth with 154 units. In short, 830 of the 1,334 Hellcat Charger sedans were either black or white – that is about 62%. Redline Red and TorRed combined to account for 218 units or 16% of 2015 Hellcat Charger production while B5 Blue and Jazz Blue combined for 145 units or 11%. Billet Silver and Granite Crystal accounted for just 141 units, making this color group the least popular with 10.5%. However, it should be noted that Jazz Blue was the least popular color for the 2015 Hellcat Charger with just 36 examples built.

The Most Unique Hellcat Chargers
The Hellcat.org member who helped compile this information goes by the handle PLMCRZY, and in addition to breaking production figures of the Charger SRT Hellcat up by color, this member also split up sunroof and non-sunroof cars. This allows us to see which general configuration of 2015 Hellcat Charger is the most unique, and while Jazz Blue was the worst selling color, Jazz Blue isn’t included in the most unusual configuration.

With just 14 units built for the 2015 model year, the Dodge Charger SRT Hellcat in Billet Silver without the sunroof is the configuration that was ordered the least. The most popular configuration was the Hellcat Charger in Phantom Black with a sunroof and for the entire breakdown on both 2015 Hellcat cars, you can click here to see their charts for yourself.

The problem for the Hellcat Charger was that production and sales of the Hellcat Challenger began months earlier and by the time production and orders for the Hellcat Charger opened – the company was already overwhelmed with orders for the 707hp coupe. There has been a tremendous amount of interest in the Charger, but with so many orders placed for the Challenger and the company struggling to fill those orders, the Charger suffered. Hellcat sedan isn't low for 2015 because interest was low - production was low because the interest was so insanely high in the Challenger. That is a good problem for an automaker to have, especially with a pair of cars that both cost over $60,000.

The vast majority of the folks who were unable to buy a Hellcat car in 2015 wanted a Charger. Some of them ended up buying a Challenger instead while others had no choice but to wait for the 2016 models.

Fortunately, with the company looking to build twice as many Hellcat cars for the 2016 model year, prospective buyers should have much more success in buying their 707hp Charger and Challenger over the next year.