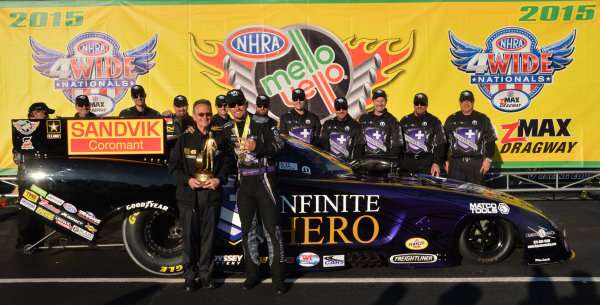 The 2015 Dodge Charger funny car continued its domination of the 2015 Mello Yello Drag Racing Series, as Jack Beckman was the first car driver across the line in all three rounds of the 2015 Four Wide Nationals – making it four wins in four events for the new Charger race car.
Advertisement

The 2015 Dodge Charger funny car has been a beast throughout the first three events of the 2015 NHRA racing season, with Matt Hagan winning two and Ron Capps winning one thus far. The fourth event of the season would pose an interesting challenge, as the teams descended on ZMax Speedway in Charlotte, North Carolina for the unique Four Wide Nationals. Unlike normal races that have cars racing two at a time, ZMax has four side-by-side lanes, allowing the cars to make each round in groups of four. In each race of the first two rounds, two drivers win and two drivers lose while in the final race, all that matters is being across the line first.

There were six drivers in the Funny Car field piloting Dodge Charger race cars, including Jack Beckman, Tommy Johnson Jr, Paul Lee, Ron Capps, John Hale and Matt Hagan, with all six hoping to help get the Charger its 4th win in 4 tries this season.

Qualifying
Rain forced the NHRA to shorten qualifying, the each driver only got 2 runs, but a several Dodge Charger teams made the most of their available early runs. In the first round, Beckman laid down a solid run of 4.059 seconds, but John Force and his Chevrolet Camaro turned the best time in the first round of qualifying, running a 4.040.

In round two, Ron Capps (4.051) and Matt Hagan (4.055) turned down smoking fast times, allowing them to join Beckman in the top half of the 16 car field. John Hale qualified 13th, Johnson Jr settled for 11th and Paul Lee started 14th. However, with Courtney and John Force in their new Chevrolet Camaro teams qualifying 1st and 2nd with teammate Robert Hight 7th, the Charger teams would have a tough day of racing to win their fourth straight event.

Eliminations
In the first four wide elimination round of the day for the Funny Cars, we saw the Toyotas of Del Worsham and Chad Head take on the Chevrolets of Dale Creasy Jr and fast qualified Courtney Force. Force and Creasy both struggled with traction and had terrible runs, letting Worsham and Head have the top two spots and the easy pass to round two. Worsham was the quickest of the run with a 4.040.

The second run of round one saw Robert High and John Force in their Camaros take on the Toyotas of Tony Pedregon and Alexis DeJoria, with the John Force Racing Camaros handing a sound beating to the two Toyotas. Hight was the quicker of the two Camaro teams, running a 4.027.

The third race saw four of the Dodge Charger teams all go head to head, with Beckman, Johnson, Lee and Capps all fighting for the two transfer spots. Capps redlit and Lee smoked the tires, letting Beckman and Johnson grab the top two spots. Johnson had issues late in the run and only ran a 7.803, but it was good enough to finish second in this heat. Beckman was the quickest of the four Dodge funny cars with a 4.051.

The fourth and final run of the first round saw Cruz Pedregon in his Camry taking on Tim Wilkerson in the only Ford Mustang in the field along with the Dodge drivers of John Hale and Matt Hagan. Hagan went red and Wilkerson ran into problems, sending Cruz and Hale into the next round. Pedregon was the quickest with a balmy 4.167.

Semifinals
In the semifinals, the first run saw Beckman, Johnson, Force and Hight face off in a classic Dodge-v-Chevy battle. Force and Hight both ran into traction issues while Beckman and Johnson both made full, fast runs. Beckman was the quicker of the two with a 4.000.

In the second semifinal run, Worsham, Head and Cruz Pedregon took their Toyotas to the line to race John Hale. Pedregon broke at the line and Hale had traction troubles, sending Worsham and Head into the finals. Worsham ran a 4.067 as the quickest in this heat.

The Finals
The final round of the 2015 Four Wide Nationals saw the 2015 Dodge Charger funny cars of Jack Beckman and Tommy Johnson Jr racing against the Toyota Camry funny cars of Del Worsham and Chad Head. Johnson had problems early on and Head ran into troubles further down the track, but both Beckman and Worsham made strong, full runs with Beckman’s Charger taking the win with a 3.983 to Worsham’s 4.012.

The NHRA website hasn’t updated the Funny Car class points since the Four Wide Nationals, but we know that the win moved Jack Beckman into the 7th spot while Del Worsham jumped into the championship lead four events into the season.