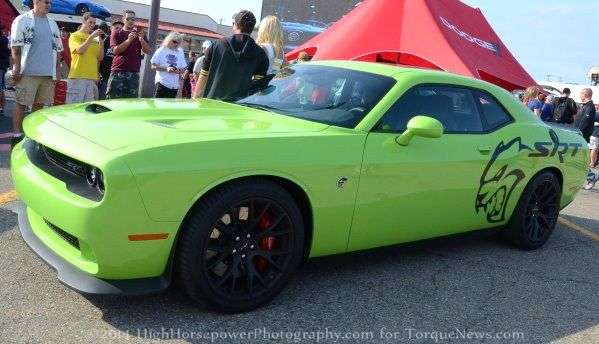 The 2015 Dodge Challenger SRT Hellcat is Underrated at 707hp

The folks from Motor Trend recently took the 2015 Dodge Challenger SRT Hellcat to the dyno at the K&N Engineering shop and they found that the official figures 707 horsepower and 650lb-ft of torque are underrated – possibly by a whole lot.
Advertisement

In the world of high performance street cars, automakers have been underrating them since the 1960s (if not before that), so it shouldn’t come as any huge surprise that the 2015 Dodge Challenger SRT Hellcat offers more than the 707 horsepower and 650lb-ft of torque that it is stated to have in Chrysler’s marketing literature. However, it does come as a very pleasant surprise that the most powerful American production car of all time is seemingly underrated by such a significant measure – with calculated power figures that move it much closer to the high priced supercars that rank above it on the list of the world’s most powerful production road cars.

The Challenger Hellcat on the Dyno
Motor Trend took the 2015 Dodge Challenger SRT Hellcat with the new heavy duty 8-speed TorqueFlite automatic transmission to K&N Engineering’s dyno in Riverside California to see how true the power numbers are for this brawny Mopar muscle car. With stated figures of 707 horsepower and 650lb-ft of torque, the Hellcat Hemi makes the Challenger (and the Charger) the most powerful American production car ever while also ranking 6th when compared to every other current production car in the world so with claims like that – you know that someone would be getting a Hellcat powered Challenger to the dyno in a hurry.

Well, Motor Trend appears to be the first publication to put the 2015 Dodge Challenger SRT Hellcat on the rollers and not only did it prove those numbers – it blew them away.

The Hellcat Challenger put down 635 horsepower and 591lb-ft of torque to the rear wheels with the automatic transmission. The industry norm for calculating engine horsepower at the crankshaft based on drivetrain loss is 15% and if 635 horsepower is “only” 85% of the Hellcat Hemi’s actual power output – the engine is making closer to 747 horsepower. Using that same math for the torque output, 591lb-ft would be about 85% of 695…although considerably higher than the 650lb-ft of torque that Chrysler claims. If those power figures were official, the Challenger SRT Hellcat would pack more horsepower than the Ferrari F12 Berlinetta and the Lamborghini Veneno and in terms of torque – no other production car in the world could rival 695lb-ft.

In their article, Motor Trend uses a far more conservative 12% drivetrain loss for the Hellcat Hemi, which still makes the 2015 Challenger far more powerful than the official numbers with calculated figures of 722 horsepower and 672lb-ft of torque. Again, this is with an automatic transmission that is almost assuredly less efficient than the 6-speed manual transmission so those Challenger SRT Hellcat models with the Viper’s Tremec transmission will likely put down even more power to the rear wheels.

Take These Numbers with a Grain of Salt
While the calculated dyno numbers for the self shifting 2015 Dodge Challenger SRT Hellcat are very, very impressive, I should remind everyone reading this that there are plenty of variables at work here and that the figures that I calculated above are far from official. I would imagine that of all of the dynamometers in the country, the one used by K&N Engineering is pretty accurate. However, actual dyno tests from one shop to the next can vary greatly. Also, the only numbers that really matter here are the actual wheel horsepower and wheel torque figures, while the others are simply calculated based on what we believe are realistic drivetrain loss percentages.

This first round of testing by Motor Trend shows that there is a very good chance that the Hellcat Challenger makes more power than advertised – but how much the Hellcat is underrated will be debated until someone tears one out of a car and straps it to an engine dyno in a fully controlled environment. Provided that the MT/K&N numbers are accurate and the Chrysler Group official numbers are accurate, the Challenger has a drivetrain loss of around 9%. This means that the Hellcat Challenger is either underrated from the factory – or it is one of the most efficient vehicles ever made.