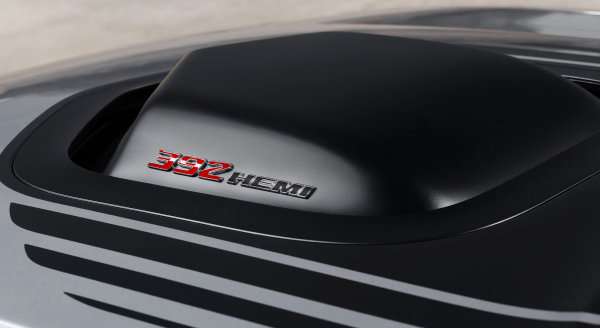 While I have been covering just about every aspect of the 2015 Dodge Challenger over the past few weeks, a few readers have written in, asking about the availability of the unique Shaker models and while they are most certainly on their way – they won’t be hitting showrooms until the spring of 2015.
Advertisement

When the Chrysler Group introduced the 2015 Dodge Challenger at the New York Auto Show in April, they announced that the awesome Shaker hood package from the limited edition 2014 Challenger R/T Shaker would be available as a much more readily available option. The Shaker hood was only available for the 2014 model year on the Shaker Edition R/T and with the far more limited Mopar 14, but for the 2015 model year, the R/T and the new Scat Pack Challengers will all benefit from what I consider to be the coolest factory hood option in many, many moons. Best of all, unlike 2014, the Shaker hood will be far easier to get a hold of since it isn’t being produced in such limited numbers so everyone who really wants a modern Shaker equipped Challenger should be able to get one for 2015 – but they’re going to have to wait until Spring of 2015.

DONT' MISS: A Review of the 2014 Dodge Challenger Shaker: The Coolest Special Appearance Package on the Market

A 485hp Shaker Challenger Arrives in the Spring
For the 2014 model year, the Shaker hood was only available in two limited edition packages for the Challenger R/T with 375 horsepower and 410lb-ft of torque – the Mopar 14 and the Challenger Shaker. For the 2015 model year, Challenger buyers will be able to select the Shaker hood package for both the R/T package as well as the new 392 Scat Pack – which offers 485 horsepower and 475lb-ft of torque. In offering the Shaker hood package across both the R/T and Scat Pack trimlines, it will offer new levels of performance under the protruding hood scoop while the full availability will allow far more prospective buyers a chance of parking a Shaker-equipped Mopar muscle car in their garage.

The only “bad news” for those folks looking to purchase a 2015 Dodge Challenger Shaker model with either the 5.7L or 6.4L Hemi is that they won’t arrive until the Spring of 2015 and while some people will be upset to hear of the lengthy wait for the 2015 Shaker models – the move makes sense for the Chrysler Group and the Dodge brand.

Why Is Chrysler Waiting Until Spring?
Some of our readers who are looking forward to buying a 2015 Dodge Challenger with the 1971 design flavor – right down to the Shaker hood – are likely upset to hear that they will have to wait until next spring . Those folks might think that Chrysler should have just rolled out the 2015 Shaker models at the same time as the rest of the lineup, but the decision to wait makes good sense. Figure that if you look at all of the trimlines for the 2015 Challenger available at launch, there are eight different options – SXT, SXT Plus, R/T, R/T Plus, R/T Classic, R/T Scat Pack, SRT 392 and the mighty SRT Hellcat. That is a whole lot of trimlines for one car, especially considering that this is a refreshed model, so adding the Shaker packages (R/T Shaker, R/T Plus Shaker, 392 Scat Pack Shaker) at launch would have meant that Chrysler had to promote and market a total of 11 trimlines before the dealership launch. That might not sound like much to you, but it is a very heavy load for both the marketing department at Chrysler and the media…and that would leave some models getting lost in the shuffle.

Waiting until Spring of 2015 to launch the 2015 Dodge Challenger Shaker models will not only allow them to focus more intensely on the marketing for those unique models, but it will also rekindle the interest around the 2015 Challenger after the initial rush of buyers have gotten their fill. Right now, the 2015 Challenger is the hot new muscle car on the block so everyone is very interested in everything about it – from the new exterior design to the 707 horsepower Hellcat Hemi. However, once cars have starting reaching dealerships over the next few months, the media coverage and consumer interest will fade a bit…and this happens with every new model. Waiting until the Spring will draw the attention of both the media and the consumer market, bringing the refresh Mopar muscle car back into the limelight right at the perfect point in the 2015 calendar to buy a muscle car and go cruising.

The wait for the 2015 Dodge Challenger Shaker models is a bummer, but I love the look of the new Shaker hood design and I believe that it will be well worth the wait.

Cory W wrote on August 13, 2014 - 5:00pm Permalink
So it will only be the shaker models that will be held off till next year?
Patrick Rall wrote on August 19, 2014 - 10:23am Permalink
Yes sir. Well, not including any models that have not been announced yet. The 2015 Challengers with the "normal hood" are available for orders now. The Hellcat orders will begin soon and the Shaker models will arrive next spring.
shawn wrote on August 24, 2014 - 12:19pm Permalink
Hello how mush will the dodge shaker models cost?
RICHARD FAUDEL wrote on October 14, 2014 - 5:48pm Permalink
I DROVE DODGE ALMOST MY LIFE...BUT THE CALLENGER R/T THAT I HAVE IS THE BEST CAR I EVER HAD.....CHRYSLER GUYS, YOU MADE A GREAT JOB ON THIS ONE....I WILL WAIT FOR SPRING FOR MY SHAKER HOOD, DON'T WORRY....WHAT A RIDE, THANKS YOU CHRYSLER.....
Charles H wrote on August 25, 2014 - 2:50pm Permalink
There are still a few 2014 Shakers on dealer lots and a few more 2014s always come up for resale. Introducing the 2015 Shakers now will make it tough to unload remaining 2014 Shakers.
Michael Redman wrote on August 31, 2014 - 9:21am Permalink
I am told you can only get the Shaker Head Scat Pack on the 392. I thought originally it was going to be offered on the RT model too??? I also thought Dodge was going to have a Scat Pack 1 , 2, and 3 version... Is this option available anywhere ????
Cory W wrote on September 8, 2014 - 11:58am Permalink
It will be available for the 5.7 and the 6.4. They won't be producing those till next year. Talked to dealer yesterday. We ordered 6.4L scat pack without shaker hood in July. They will start building on Sept 16th. Supposedly in the first run of challengers going across the line. Should have by late October.
Brian Nickels wrote on November 16, 2014 - 8:33am Permalink
You can get the RT Scat Pack right now, it's the RT with the 392 engine. The Shaker RT 392 will not be released until Spring, it's the same car with the 1971 style hood and slightly different badging, like the 392 on the hood scoop. I have driven the RT with the Scat Pack and I kind of like that it looks like a regular RT with the only difference on the outside being the old Mopar emblem of the Bee between two wheels. The 485 horsepower RT with the split hood is 39,500 out the door, it comes standard with touch screen sound system and controls, a rear camera, 20 inch wheels, and updated suspension and new interior and the exterior is still modeled on the 1971 Challenger. The rear lights are split and not one single plastic piece like previous models.
Charles H wrote on November 16, 2014 - 10:38am Permalink
The standard touch screen sound system is a microscopic affair out of a Cracker Jacks box, incongruent with the adjacent styling cues and the laughingstock of the Mustang and Camaro guys.
Robert Sacimonious wrote on November 17, 2014 - 12:37pm Permalink
Anyone driving the new RT with the Scat Pack will be laughing their balls off at you in their rearview mirror. I almost bought a Camaro SS, until my wife pointed out correctly, most of the people driving them are women, or act like one.
Doolin wrote on December 24, 2014 - 4:39pm Permalink
Interesting, yet uneducated hater comment, since the ONE thing the Chrysler group has been commended for is having the best, easy to use colorful touch screen systems in their 2015 cars... Rated at the top not just in America, but internationally as well.
Jake Gibson wrote on October 21, 2014 - 2:37am Permalink
Are they going to have the shaker on the hellcat?
bernie morrissette wrote on November 28, 2014 - 5:33am Permalink
I put my down payment on a scat pack shaker I'm looking forward to March or April when it arrives.,I'm ok with the wait,it's giving me something to look forward too!!! I'm driving a 2014 dodge ram sport 4x4 to get me through the winter,I love this truck, I hope dodge puts the hell cat motor in this truck if they do I'll have it too in my garage!!!
Dan B wrote on December 3, 2014 - 6:55pm Permalink
I have a restored 1969 Road Runner and a Dodge Daytona truck with a hemi. I am going to order the 2015 392 "Shaker" when available in the spring. I almost pulled the trigger on a 2014 when the limited shaker hoods came out, but was hoping Dodge would improve the interior for 2015 (which they have), and more safety features added including hi intensity headlights, blind side detection, and rear view cameras. I couldn't ask for more and this will certainly compliment my Mopar stable!
michael g.page wrote on April 24, 2015 - 10:27pm Permalink
Hi. I am a retired employee of Raybestos products and a long time supplyer in the past. Is this a discount that applys to that? If so I am buying a Shaker Hemi Challenger R/T Scat-Pack. Thank you for any feedback Mike
Rob wrote on May 24, 2015 - 3:00am Permalink
Can you order the SRT 392 with the Shaker hood?