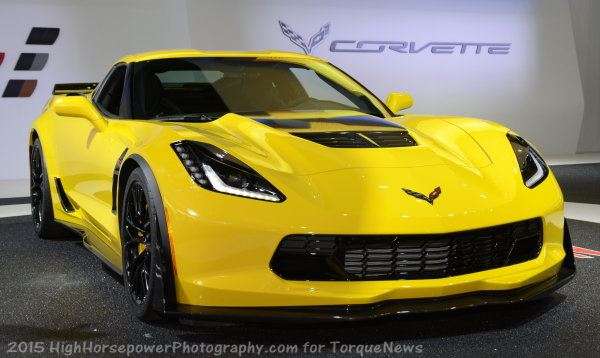 2015 Corvette Z06 Debuts in Geneva with a Big Price Tag

While the 2015 Chevrolet Corvette Z06 has already reached buyers around the United States, the 2015 Geneva Motor Show brings European supercar fans a chance to meet the 650 horsepower Vette in person, but with a price that is considerably higher in Europe than it is in the US – the most track capable Corvette of all time is reserved for fans with the deepest pockets.
Advertisement

The 2015 Chevrolet Corvette Z06 made its grand debut more than a year ago at the 2014 North American International Auto Show in Detroit and buyers around the US have already had a chance to put the most track capable Corvette ever to the test. The C7 Z06 will also be sold in various European markets, but the ongoing 2015 Geneva Motor Show marks the first time European show-goers have a chance to greet the supercharged American supercar in the flesh.

The Corvette to Battle Europe’s Best
the 2015 Chevrolet Corvette Z06 is slated as the most track capable Corvette of all time and based on that comment, the C7 Z06 should be able to outrun the C6 Corvette ZR1. The ZR1 set some stunning times at the Nürburgring, beating some of Europe’s best a few years back and with no entries from the likes of Lamborghini, Ferrari and Porsche, the 2015 Corvette Z06 has some new, impressive performance overseas.

The C7 Corvette Z06 sold in Europe will be identical to the car sold here in the US, with a supercharged LT4 engine measuring 6.2 liters and delivering a mix of 650 horsepower and 650lb-ft of torque. The LT4 sends all of that power through either a 7-speed manual transmission or a new 8-speed automatic while a high performance suspension setup and a massive braking package ensure that the new Z06 can get around a turn just as well as it can blast down a straightaway.

European Z06 has Big Power and Big Price
Where the Corvette Z06 sold in Europe differs the most from those sold in the US is in their price tags, as European Z06 buyers pay a similar markup as American buyers do when buying something like a new Porsche or BMW. Some of this added cost comes from the cost of getting the car to the foreign markets, the costs of getting the relatively low-volume cars approved for foreign markets and the simple fact that you pay more for a foreign car of this type.

We do know that the 2015 Corvette Z06 sold in Germany will come with the optional Performance Package, which is what we know as the Z07 package. This adds the Brembo carbon ceramic brakes, the adjustable aerodynamic bits and the Michelin Pilot Super Sport tires. It also adds 16,500 Euros/$18,275 USD to the final price – which is almost $10,000 more than American buyers pay for the same package.

Auto Motive wrote on March 5, 2015 - 7:37am Permalink
Give me a break when you say expensive. Expensive is a Porsche, Audi R8 and the list of super cars goes on. The Z06 is a bargain with 0-60 numbers at 2.95 seconds. Lateral g's 1.5 and holds the track like superglue. Name a super car in Europe that has a better price with this type of performance.