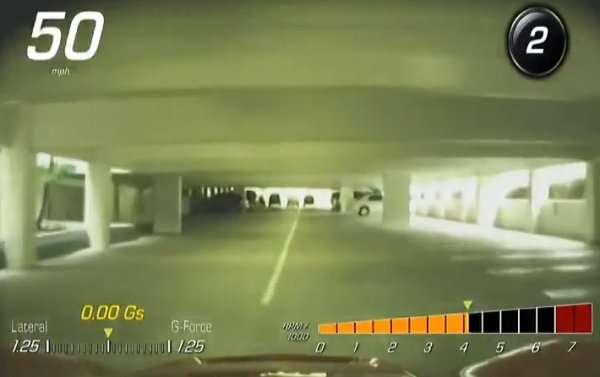 The 2015 Chevrolet Corvette is fitted with a Valet Mode that locks the glove box, prevents safety features from being disabled and activates a front-facing camera that records what is going on in front of the Corvette while being driven – and one of those videos has surfaced on YouTube showing a valet blasting through a tight parking garage in a 201 Stingray.
Advertisement

A 2015 Chevrolet Corvette Stingray owner named Dan Cowles and his wife went to a concert in Costa Mesa California this past weekend, leaving his bright red C7 in the possession of a valet to handle the parking. Cowles and his wife returned home after the concert and when Dan checked the Valet Mode video, he was shocked to see the driver have a bit of risky fun in the $50k+ sports car while taking it to be parked.

50 Miles Per Hour in a Parking Garage
Parking garages are usually pretty cramped and the garage in which Dan Cowles’ 2015 Corvette Stingray was being parked is no exception. The video, which you can view below from Dan’s YouTube channel, shows the car being driven from the outdoor drop-off area into a parking garage. At first, everything seems to be going as you would like to expect as an owner. However, roughly a minute into the video, the driver stops in an empty portion of the garage for seemingly no reason. When he launches hard from a stop, rocketing through the parking garage and hitting 50 miles per hour in second gear as he quickly reaches a far more crowded area. In fact, the driver gets troublingly close to the vehicles parked at the end of the garage when he is forced to turn the Corvette hard left.

A short time later, the valet parks the 2015 Chevrolet Corvette and in doing so, gets very, very close to the wall. The driver then backs away from the wall a bit and gets out to check for damage, although the owner reported that no damage was done.

The Aftermath
Dan Cowles quickly uploaded the video of his 2015 Corvette Stingray being thrashed in the parking garage to YouTube before calling the valet company to report the actions of the driver. At first, the owner of the valet company told Cowles that the video was illegal, hiding behind his lawyer rather than taking professional responsibility. Fortunately, Cowles pointed out what the valet company’s lawyer didn’t know – that video of this type is legal in California so long as there is no audio recording. The owner of the company then changed his tune, informing the owner of the Corvette that the foolish valet driver had been fired for his actions.

I have worked as a valet when I was younger and I can confirm that the drivers do occasionally drive the cars in a way in which most owners would not approve. The actions of the valet drivers in Ferris Bueller’s Day Off with Cameron’s dad’s Ferrari are exaggerated, but what we see in the video below happens quite often…particularly in parking situations where the valet has to take the vehicles away from where they can be heard or seen. Valet drivers should be smart enough to know that when a car has a very publically discussed valet mode – they should probably not being doing anything that the owners might not like.

This is the first instance of the valet mode in the C7 Corvette doing what it was designed to do and with this, hopefully valet drivers will learn to hoon it up in older cars. Also, this should give Corvette owners some piece of mind, as drivers will quickly learn that they are being monitored when driving the 2015 Corvette.