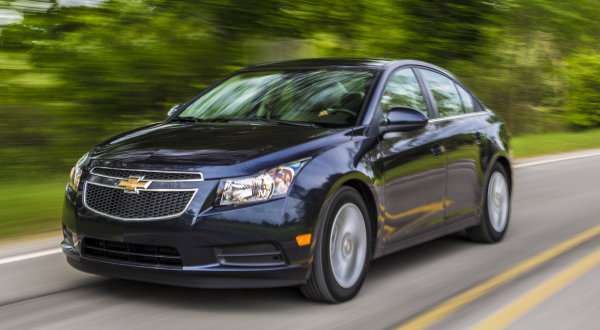 I recently had a chance to spend a week driving the 2015 Chevrolet Cruze Diesel and while the American car-buying public is hesitant to accept diesel engine technology, I can say without any doubt that this is the best engine option for the Chevy Cruze – both in terms of driving dynamics and fuel economy.
Advertisement

While diesel powered passenger cars are very popular in Europe, American consumers have been hesitant to accept a diesel engine in their daily driven sedan and the recent Volkswagen cheating news hasn’t helped the perception of diesel engines in the USA. However, even though the bestselling diesel cars in the US have been found to be far dirtier than promised, there is still a great clean diesel passenger sedan on sale in the US in the form of the 2015 Chevrolet Cruze Diesel.

The 2015 Cruze Diesel is the most expensive of the available trimlines, starting at $26,485, but this is the most efficient Cruze, the most powerful Cruze and in standard form, it is very well appointed. I have always liked the Cruze, as it is a remarkable improvement from the Chevy Cobalt, and I wouldn’t hesitate to call the Cruze Diesel trimline the best option in every way.

The Cruze Diesel Trimline
While driving the 2015 Chevrolet Cruze Diesel, someone asked me how much the engine option costs and due to the way that Chevy has this engine option arranged as part of a fairly elaborate, it is hard to say how much it costs to add the 2.0L turbo diesel engine. You can only get the diesel engine with this premium package and at $26,485, it is the most expensive trimline for the Cruze. The Cruze 2LT with the 1.4L turbo gas engine starts at $24,095 and it has comparable features to the Diesel trimline, so you could say that the 2.0L diesel engine is roughly $2,500 more than the turbocharged gas engine.

However, you cannot look at the premium pricing of the 2015 Chevy Cruze Diesel and complain that the diesel engine makes it the most expensive trimline in the lineup. The diesel engine option also comes with a standard 6-speed automatic transmission, heated leather seats with a power driver’s seat, a leather steering wheel, express window controls, the Chevrolet MyLink infotainment system, 17 inch alloy wheels, 4-wheel disc brakes, a sport tuned suspension setup and a unique aerodynamic package. The diesel engine is obviously the heart of the Cruze Diesel package, but this engine is far more elaborate than your average engine upgrade. When you add the optional navigation system and the sunroof, the Diesel Cruze has pretty much everything that you could want in a compact sedan so the diesel package is the most well-appointed trimline for the compact Chevy sedan. The long list of standard features makes the 2015 Chevrolet Cruze Diesel a great car to ride in, but the 2.0L turbo diesel engine makes this the most exciting of the Cruze family while also being the most fuel efficient by a significant margin – and that is why the diesel package is so very impressive.

Driving America’s Clean Diesel
The 2015 Chevrolet Cruze Diesel is powered by a 2.0L turbocharged diesel 4-cylinder mated to a 6-speed automatic transmission. This drivetrain delivers 151 horsepower and 264lb-ft of torque, making this engine substantially more powerful than the 1.8L or 1.4L gasoline engines so while it costs more, you are getting your money’s worth in terms of power. As you might expect, that advantage in power translates an equal advantage in real world performance.

Like many turbo diesel engines, the 2.0L Cruze engine has an instant of hesitation when you put the throttle to the floor from a stop as the turbo quickly spools up. For that first second, the Cruze doesn’t seem quite as quick as the 1.4L gas engine in the same car, but once the turbo in the diesel engine spools up – this Cruze accelerates far harder than any of the other compact Chevy sedans. As the 6-speed engine pops from gear to gear, acceleration is strong and steady to speeds well beyond any posted speed limit in the United States. I would go so far as to say that the Cruze Diesel is surprisingly quick, particularly when you have the engine at higher RPM. The only delay in acceleration comes from a stop at idle, as everywhere else in the driving cycle, putting the pedal to the floor quickly brings about all of that available horsepower and torque. When you couple this powerful engine with the sport tuned suspension that comes with the Cruze Diesel package, this really is the most engaging Chevy Cruze from a driver’s perspective. It corners nicely while offering a smooth, comfortable ride and it is by far the most powerful – whether you are accelerating from a stop or building speed while already in motion – the Cruze Diesel will satisfy the need for speed better than any other engine option available now.

The one criticism that some people might have is that when you first start the engine in the 2015 Chevy Cruze Diesel, it sounds like a diesel engine. Some companies try to disguise the traditional diesel engine sound, but the 2.0L turbo diesel in the Cruze maintains that distinct sound. However, when you accelerate, it is not a sound that gets louder with higher engine RPM. It might seem a touch louder than your average gasoline powered Cruze when sitting in your garage, but once you are driving down the road, the engine of the Cruze Diesel is not noticeably louder than the gas engines.

The EPA expects that the 2015 Chevy Cruze Diesel will achieve 27mpg around town, 46mpg on the highway and 33mpg combined. In my driving experiences, I found those numbers to be easily achievable and in simply following the handy little efficient driving screen on the gauge cluster, I was able to get far better fuel economy. Mind you, I’m not saying that I drove under the speed limit to get great fuel economy, but instead, I used the efficiency screen to keep the engine in the optimal range for the best possible fuel economy. I still traveled at normal speeds, but I tried to follow the gauge that basically tells you when you are accelerating too quickly. When moving at the same speed as normal traffic, I found that on the highway, I was able to average closer to 50 miles per gallon. From time to time, when I hit a hill or had to slow down and speed back up, the numbers would drop into the lower 40s and high 30s, but on a long highway trip, I was able to average just shy of 50mpg in an area where the speed limit is 70 miles per hour. I suspect that in an area with similar topography and a lower speed limit, even better highway numbers are very possible.

Around town, the Cruze Diesel is nowhere near as efficient, but in cruising around town, I was still able to keep the numbers in the 27-31mpg range, depending on the speed limit and traffic. Overall, on a trip where I maintained an average speed over the course of a 60 mile trip with an even mix of highway and “city” driving, I averaged 36.8mpg. Even on a trip where I drove the car much harder, moving along with the faster moving traffic on a similar trip, I still averaged better than 34 miles per gallon – 1 tick better than the EPA predicted combined figure.

The Final Word
If you want an incredibly fuel friendly compact sedan that is also the most powerful in the lineup – the 2015 Chevrolet Cruze Diesel is easily your best choice in the US market. Outside of hybrid models, there are no cars of this size which will get this close to 50mpg and unlike the super-efficient hybrids, the Cruze Diesel is also the most powerful engine option.

The 2.0L diesel in the Chevy Cruze provides the best of both worlds with incredible fuel economy and impressive levels of power. When you add on the fact that the Cruze Diesel has the long list of standard features that lift the cabin to near luxury levels – this is by far the most impressive package in the Cruze lineup. The Cruze Diesel might be the most expensive package, but you get what you pay for and when you buy the diesel engine option for the Chevy Cruze, you get the most power and the best fuel economy, and unlike the Volkswagen diesel engines, the 2.0L turbo diesel in the Chevy sedan will pass emission tests from coast to coast.

Now that the VW diesel cars have the questionable future due to their emission cheating systems, the Chevy Cruze Diesel might just be the best combination of power and performance available in a compact sedan in the US market today. Most importantly, you will be hard-pressed to find a car that has this many features, this much power and such great fuel economy figures with a price starting below $27,000.