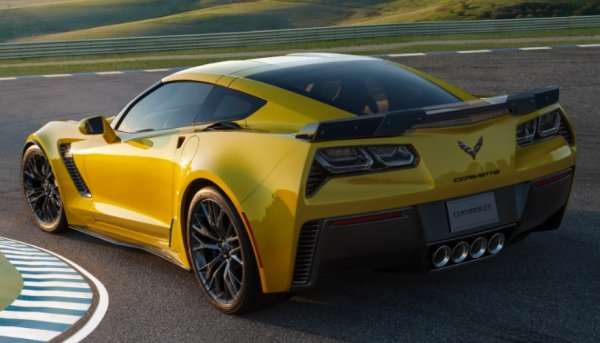 The first seemingly official performance numbers for the 2015 Chevrolet Corvette Z06 coupe have hit the web and the newest American supercar is capable of hanging with the big boys – offering a 0-60 time of just 2.95 seconds and a quarter mile best of 10.95 at 127 miles per hour.
Advertisement

We learned a while back that the 2015 Chevrolet Corvette Z06 would pack a new supercharged LT4 V8 that delivers 650 horsepower and 650lb-ft of torque so with numbers like that, it isn’t hard to understand General Motors’ claim of the C7 Z06 being the most track capable Corvette of all time. However, when we learned more recently that the new Z06 was literally the heaviest Corvette production road model ever – it brought into question whether some performance metrics would suffer due to the heavy dose of high tech handling features.

Sure, the C7 Z06 will outhandle any Corvette ever, but would the heaviest Corvette ever still be able to able to win in a head to head, straight line drag race?

“The Corvette has long been known as America’s sports car,” said Mark Reuss, General Motors’ executive vice president, Global Product Development. “With the capability of the new Z06 rivaling the best performance cars in the world, we will also be America’s Supercar.”

Comparing the 2015 Corvette Z06 to the 2013 Corvette ZR1
For the 2015 Chevrolet Corvette Z06 to be the most track capable Corvette of all time, it will need to beat the C6 2013 Corvette ZR1, which is currently the quickest, fastest and most track capable model until the C7 Z06 proves otherwise. The new Z06 will be compared to the “old” ZR1 until it has proven itself better in every way and the first step was to have more power – which it does. The new Z06 has more power and more torque, but it also weighs more than the ZR1 so how would real world performance numbers compare? Well, based on the first performance times for the 2015 Chevrolet Corvette Z06, it is indeed faster than the C6 ZR1 in a straight line. In looking around the internet a bit, the 2013 Corvette ZR1 was able to move out from a stop to 60 miles per hour in 3.3 to 3.4 seconds (on average) while running the quarter mile in anywhere from 11.0 to 11.4 seconds – with many numbers leaning towards the top end of that scale.

With a time of 2.95 seconds, the heavier 2015 Corvette Z06 is able to blast to 60mph significantly quicker than the C6 ZR1, presumably due to the fact that the new 8-speed automatic transmission was used for these first times and that gearbox makes launching hard a bit easier. Also, the vast majority of reported quarter miles times for the new Z06 are at least a tenth or two quicker than the times of the previous generation blown Vette. Mind you, there are surely better times out there for the C6 ZR1, but I am just going on commonly published numbers for a basic comparison to these first performance numbers for the C7 Z06. We can most certainly expect to see better times for the new Z06 once they reach new owners around the US.

2015 Corvette Z06 VS The World
While it is important from a marketing perspective for the 2015 Chevrolet Corvette Z06 to beat the previous Corvette ZR1, the bigger deal for most consumers is how the Z06 compares to the other supercars sold in the US.

First and foremost, the only true competitor for the 2015 Corvette Z06 from within the USA is the Dodge Viper. The 0-60 times for the current Viper tend to vary between 3.2 and 3.4 seconds while the quarter mile time for the V10 supercar generally range from 11.2 to 11.4 seconds…all of which are slower times than what owners can expect from a well driven 2015 Z06. This could change if Chrysler begins using the 8-speed automatic transmission from the Hellcat Challenger in the Viper, but for the time being, the new Z06 appears to be able to handily beat the Viper in a straight line.

The next biggest competitor to the 2015 Chevrolet Corvette Z06 in the US market is the Porsche 911 Turbo – a car which is able to hit 60 from a stop in 2.6 seconds while running a quarter mile in 10.9 seconds. Based on those numbers, the turbocharged Porsche will beat the Z06 to 60 and through the quarter mile, but the reported quarter mile trap speeds for the Corvette are much better than the Porsche. Based on that, I believe that a race between the 911 Turbo and the new Z06 will always be a driver’s race. It should be noted that while the 2015 Corvette Z06 “only” costs $78,995 while the Porsche 911 Turbo starts at $182,700.

Now, we just need to see those Nürburgring test times for the C7 Z06…