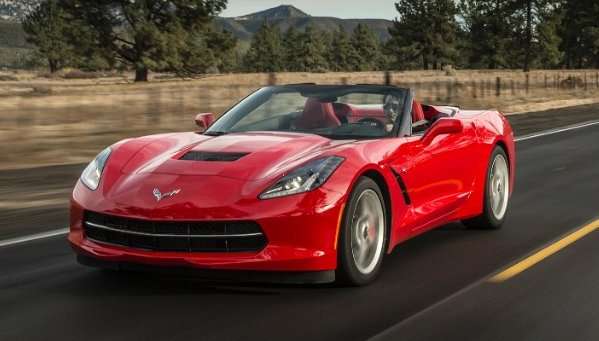 General Motors has issued a pair of recalls for the 2015 Chevrolet Corvette Stingray due to two separate and unrelated safety risks that were initially the cause for a stop sale order when the 2015 models first began reaching dealerships last month, but around 900 examples of the affected Corvettes did reach consumers so a recall was necessary.
Advertisement

In early September, General Motors discovered a pair of safety issues in the newly released 2015 Chevrolet Corvette Stingray. One pertained to the driver’s side airbag system while the second focused on the rear parking brake assembly. Both of these issues were serious enough for GM to issue a stop-sale order, as the automaker wanted dealerships to inspect the car on their lots before handing them out to new customers. Unfortunately, some of the 2015 model year Corvette Stingrays affected by these problems did reach private hands and because of that, General Motors has recalled around 900 examples of the hot-selling C7 Corvette.

2015 Corvette Rear Brake Assembly Recall
In the first and larger of the two recalls, GM is concerned that around 800 2015 Chevrolet Corvette Stingrays have a rear braking assembly that was not correctly installed. All Corvettes should have two parking brake cables – one going to each of the rear wheels – but GM believes that in these 800 cars, one of those cables may not be installed correctly. If installed incorrectly, the parking brake cable will not engage the parking brake fully or at all and having only one parking brake engaged could increase the likelihood of a rollaway incident, especially when the car is parked on a steep grade.

The 800 2015 Chevrolet Corvette Stingray coupes and convertibles that may be affected by this recall were all built between August 20th and September 4th. When these Corvettes return to the dealership, the technician will inspect the rear brake assembly to make sure that both parking cables are installed correctly and that both parking brake assemblies are functioning as expected.

2015 Corvette Airbag Recall
The second 2015 Chevrolet Corvette Stingray recall is the smaller of the two recalls with only around 100 units affected by the problem, but this problem could be more dangerous to owners than the parking brake issue.

In these 100 2015 Chevrolet Corvette Stingray coupes and convertibles, all of which were built between August 20th and August 27th, GM is concerned that the airbag module backing plate could fracture when the airbag opens. Should that happen, the airbag could separate from the steering wheel of the Corvette.

Have you ever seen those videos of people triggering airbags and they go flying 50 feet into the air? Imagine that happening between you and the steering wheel of your Corvette. That is an excellent example of why this recall is so troublesome, but the automaker is making the quick call to get these cars back to dealerships. The fix is as simple as the dealership technician replacing the steering wheel mounted airbag assembly.