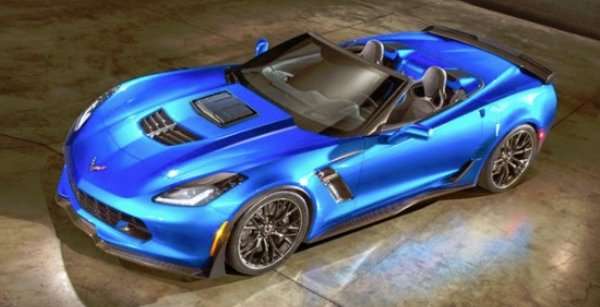 The National Corvette Museum C7 Bash opened today in Bowling Green, Kentucky and the folks at Callaway Cars have used this three day festival of GM performance to introduced their take on the 2015 Corvette Z06 – with even more power from the most track capable Corvette of all time.
Advertisement

Callaway Cars has a long history of modifying General Motors vehicles and we can expect that the Callaway version of the 2015 Chevrolet Corvette Z06 – which is the most powerful factory production GM vehicle ever and the most track capable Corvette of all time – will be the best performing Callaway Corvette of all time. With the National Corvette Museum C7 Bash bringing Corvette fans and owners from around the country to Bowling Green, Kentucky from April 23 through April 25, Callaway has used the museum show to debut their 2015 Corvette Z06.

Unfortunately, Callaway hasn’t announced the full specifications for their 2015 Z06 package, but they have announced all of the key components and from there, we can make some guesses as to the kind of power the Callaway Corvette Z06 might make.

Figure that if the Callaway supercharger setup adds the same 36.5% horsepower and 31% torque to the 2015 Corvette Z06, the final output would be in the area of 887 horsepower and 851lb-ft of torque. However, with the LT4 being a factory forced induction engine, Callaway should be able to add more boost and create greater power levels with the boost-ready Z06 engine. Realistically, 900 horsepower and 900lb-ft of torque isn’t out of the realm of possibility.

A Surprisingly Low Price
The Callaway Corvette Z06 package includes the go-fast bits mentioned above along with a bunch of aesthetic goodies like a Supercharger Surround Hood Trim Ring, Carbon Engine Covers, Embroidered Floor Mats, Anodized Aluminum Door Sill Panels, Exterior and Interior Badging, an Underhood Build Plaque with Vehicle Identification Number, an Authenticity Documentation Package and Callaway branded key fobs. The base price for this package is just $16,995 so when added to the $80,990 base price of the Corvette Z06, the Callaway Corvette Z06 carries a base price of $97,985.