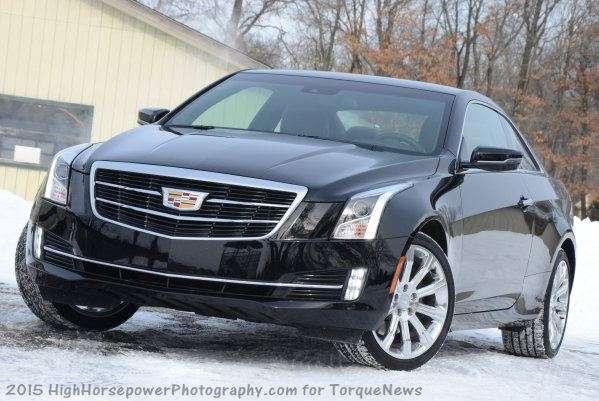 I recently spent a week behind the wheel of the 2015 Cadillac ATS Coupe with the 2.0L turbocharged 4-cylinder engine and with the 6th generation Camaro being built on the same Alpha platform chassis, this compact luxury coupe could preview a very good 4-cylinder Camaro for 2016.
Advertisement

When the 6th generation Chevrolet Camaro debuts for the 2016 model year, it will ride on the same Alpha platform as the 2015 Cadillac ATS coupe and while we can expect that the muscle car will have a slightly larger form, I don’t expect it to weigh all that much more than the 3571lb curb weight of the Caddy. There has long been a debate over whether or not GM would offer a 4-cylinder engine in the Alpha-based 6g Camaro, but based on how much I enjoyed the ATS with the turbocharger 2.0L 4-cylinder, I think that the same engine with some tweaks could make for a great super-efficient option to rival the 2015 Ford Mustang EcoBoost.

My 2015 Cadillac ATS coupe was an all-wheel drive model with the 2.0L turbocharged 4-cylinder engine and the 6-speed automatic transmission. Obviously, the 2016 Camaro will not be all wheel drive and I expect that it will have a wider, more stable track so driving the ATS4 2.0T certainly won’t replicate drive time in a 2016 Camaro with the same drivetrain. I also expect that the 2016 Camaro with the same engine would have more power than the Cadillac, but even with “only” 272 horsepower and 295lb-ft of torque, it is a whole lot of fun to drive.

Driving the 2015 Cadillac ATS4 2.0T
The 2015 Cadillac ATS4 2.0T is technically the base model and while it has less horsepower than the 3.6L V6, the engine is lighter, it packs more torque, and the quick-to-boost feel of this small engine is exactly what you want from an efficient performance-minded engine. From a stop, stomping on the accelerator of the ATS4 gets you away from the line in a hurry, with very little turbo lag and no wheel spin thanks to the all-wheel drive system. The acceleration isn’t going to break your neck, but it pushes you back into the seat nicely and you can climb up past any posted speed limit quickly. The 2.0L turbo 4-cylinder also offers great mid-range power, so when cruising at speed, putting the hammer down will allow you to accelerate very quickly to pass slower moving vehicles and that power sticks around long enough to push the ATS4 well into triple digits in a rush.

Again, the ATS4 with the 2.0L turbo motor isn’t trying to be a V Series model, but for the most efficient engine in the ATS lineup, it does a beautiful job of combining fuel economy and performance. Even with the all-wheel drive system that adds around 150 pounds, the ATS4 with the turbo-4 doesn’t feel underpowered and this was one of those cars that I really looked forward to driving every time I started the engine. It may not pack the raw power of the V6, but the engine is lighter and the big torque advantage helps the little Caddy coupe so quick through the mid-range.

Aside from the basic acceleration capabilities, the 2015 Cadillac ATS4 coupe is a blast to drive at high speed along twisty roads. The slightly higher ride height of the all-wheel drive model does have the center of gravity a little higher than I would expect from a rear drive model (like the 6th gen Camaro), but it still does very well for itself when being thrown hard into a tight corner with only a hint of body roll and a touch of understeer that I would expect from an all-wheel drive compact. This is a car that you can confidently toss into a corner and the chassis will respond favorably on entry while the all-wheel drive and the quick-revving turbo 4-cylinder get you out of the turn with an impressive level of urgency. Also, while carving those corners or when blasting away from a stop, the paddle shifters and manual shift mode allow you a great deal of control when both upshifting and downshifting, which adds that extra bit of driving excitement to any sporty car with an automatic transmission.

The 2015 Cadillac ATS4 coupe is one of the most entertaining small luxury cars I’ve driven and I expect that in rear-drive form, it packs even more go-fast fun with a light mix of traction issues compared to the ATS4. When you further consider the fact that the 2.0L turbo 4-cylinder is a base model, fuel efficiency engine for a luxury coupe, there is clearly room for improvement when moving that engine into a muscle car that doesn’t have the same expectations of comfort and civility.

2016 Camaro Compared to the ATS4 2.0L
As I mentioned above, we can expect the 2016 Chevrolet Camaro to be slightly larger and maybe slightly heavier than the 2015 ATS4 coupe, but if General Motors does use the 2.0L engine from the Caddy, I expect that output would increase from 272hp and 295lb-ft of torque to something like 310 horsepower and 335lb-ft of torque. Those numbers are very similar to the power figures for the 2015 Mustang EcoBoost and if GM does make a turbo-4 Camaro, the EcoBoost Mustang would obviously be the key competitor. Figure that the Cadillac needs to be fairly quiet under the hood and around the exhaust tips, so just opening up the intake and exhaust ends of the 2.0T for the Camaro would increase power and add some more of the character that you’d expect from a muscle car – even one with a 4-cylinder. At the same time, I think that even with lower specs similar to those of the Cadillac, a 2016 Camaro with a lower, wider stance and more aggressive suspension and chassis tuning would make for one very fun yet very efficient muscle car.

In addition to a new look and a new chassis, the 2016 Chevrolet Camaro will almost certainly be powered by the same LT1 engine from the Corvette Stingray and with that new V8, I would expect the 6th gen Camaro to have the 7-speed manual transmission and the 8-speed automatic transmission. My Cadillac test car was fitted with a 6-speed automatic transmission, so going with the 8-speed in the Camaro would allow GM to run lower, more aggressive gears down low while the top end gears would almost certainly make a turbo-4 Camaro the most fuel efficient GM muscle car ever.

Like the Ford Mustang EcoBoost, I truly believe that a 2016 Camaro using the Cadillac 2.0T – or some derivative of it – would be the most efficient engine in the lineup while still offering performance that would be very comparable to the V6 Camaro…if not being able to beat the V6 Camaro that weighs more and has less torque.

The 2.0L turbo-4 makes a great entry level luxury coupe engine, but I bet that with just a little work, it will make an even better muscle car engine for those looking to get better performance and better fuel economy than the V6 while spending less at the dealership and on insurance compared to the Camaro SS. As for those shopping for a 2-door luxury car, the new Cadillac ATS is a beautiful option inside and out, while the 2.0L engine provides a great combination of performance and fuel economy. Finally, adding all-wheel drive makes the ATS turbo a real beast in the snow so those folks who want a luxury car that is small, efficient, fun to drive and capable in any weather condition, the ATS4 with the 2.0T could be your next new car.

Vernon wrote on March 3, 2015 - 12:30am Permalink
Sad thing is Cadillac regular versions of the ATS and the V series do not show the potential as to what can be done. This car has so much potential but the powers that be at Cadillac have not given their all. This is a car that is half baked when you think what should have been done to differentiate the V series from the normal models and that is sad if it takes Chevrolet Camaro to show them. Caddy has not shown any import buyers why they should consider the ATS.