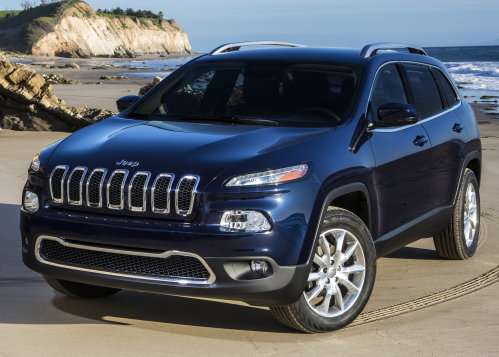 After some images of the new unnamed midsized Jeep earlier today, the company has released a handful of official images of the 2014 Jeep Cherokee – providing an early first look at the uniquely designed sport utility vehicle that will debut next month at the New York International Auto Show.
Advertisement

It is unlikely that the Chrysler Group intended to launch images of the new 2014 Jeep Cherokee at 3pm on a Friday between major auto shows but after a handful of websites posted assembly line shots of the then-nameless midsized SUV, the Jeep brand was quick to introduce official images along with the name – introducing us to the rebirth of the Cherokee. This is the vehicle that will serve as the replacement for the slower selling Jeep Liberty with a name that dates back to the 1970s applied to a vehicle designed heavily with Fiat and Alfa Romeo architecture.

One indication that the Chrysler Group may not have wanted to debut the new 2014 Jeep Cherokee today is that they really haven’t offered any information on the new vehicles nor have they included any interior shots or even images of the rear end. However, the company has unloaded a quartet of shots of the new Cherokee that give us a great look of the incredible new front end design that is really like nothing that we have ever seen before from an American company before on a production vehicle. Interesting, the leaked shots that debuted this morning also only showed the front end so our guess would be that Chrysler dropped these images as to not be outdone by those showing off the unofficial images.

While this striking front end design is surely a look that is going to draw a lot of “wows” – whether they are good or bad – there is no question that the 2014 Cherokee is distinctly Jeep yet also distinctly unique. The headlights are unlike anything that we have ever seen from an American automaker and only the funky Nissan Juke offers anything like this new face of the midsized Jeep. The most significant portion of the front end is the split headlight design with a row of LEDs and integrated turn signals lining the upper headlight lens which almost sits atop the front fenders while a second headlight lens (presumably the low beam lens is found in a separate assembly a few inches below the higher lighting assembly. It looks as though when driving with the low beams on, the lights in the middle would be lit along with the LEDs running along the top housing where the high beams kick on just below the LEDs. There is also a set of fog lights mounted low on the front fascia in a more traditional design but when you look at the front end, you just cannot avoid being drawn to the unique headlight design.

The next major feature of the 2014 Jeep Cherokee is the 7 slot Jeep grille which is similar to the others in the basic design but the Cherokee grille openings “wrap” up onto the upper part of the hood – giving the front end a very fluid look. This curved upper grille area is joined by a lower fascia opening that works with the fog lights to look quite a bit like the larger Jeep Grand Cherokee. Both the upper and lower grille openings are trimmed in bright chrome which works nicely to add a touch of class with the help of the high gloss aluminum wheels and the chrome around the side windows.

Along the sides, the 2014 Jeep Cherokee has large, squared wheel openings that give this midsized SUV a rugged look while the short hood and long greenhouse should provide lots of headroom for passengers along with a good amount of high cargo space. Black cladding along the lower portion bolsters the rough and ready look while the body colored door handles and mirrors direct the styling towards the sportier end of the spectrum.

Then, we are back to those headlights…which are really a remarkable feature of the 2014 Jeep Cherokee. This front end really looks more like something that you would expect to see on a concept car that would never see production but here it is - seemingly in production ready form. Honestly, I’m blown away but how far out Chrysler has gone with the new Cherokee and it will be interesting to see what the new car buying public things of this incredible design. I, for one, love that Jeep has gone so far out based on what I can see in these first images. Even those who do not like this new front end have to give Chrysler some respect for having the brass to roll out such a uniquely designed vehicle for the popular midsized SUV segment. If nothing else, there should be no concerns about the new Cherokee being lost in the crowd.

Click any of the thumbnails on the right for a closer look at the first four official images of the 2014 Jeep Cherokee!