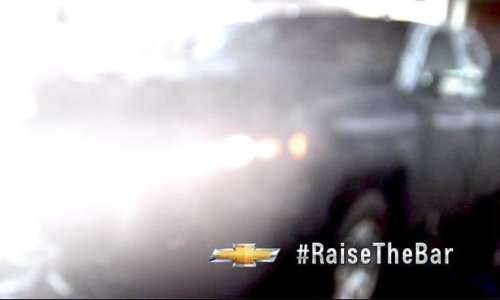 The Chevrolet Facebook page with play host to the official debut of the 2014 Chevrolet Silverado on Thursday December 13th (that’s tomorrow) – finally giving the world a look at the next generation of the popular Chevy pickup and bringing the full details on the new General Motors truck lineup.
Advertisement

The image on the right accompanied the announcement on the Chevrolet Facebook page but it obviously doesn’t provide much insight into the next generation Chevrolet Silverado. All that we can really see in this blurry image is the fact that the Silverado is, indeed, a truck...with projection headlights and it looks like it might have some big chrome mirrors. Beyond that, the rest is just speculations, rumors and spy shots.

What we expect to see tomorrow based on those rumors and spy shots is a revised Chevrolet Silverado with an exterior design that really doesn’t look to be all that different from the current production model Chevy pickup. The addition of high tech niceties like projection headlights should help sharpen up the outside but the big changes should be in the refinement and redesign of the interior, suspension and drivetrain. There is no question that the interior of the Chevrolet Silverado is in need of a refresh and the addition of a revised suspension system should help improve a ride quality issue between the current GM trucks and the counterparts from Ford and Ram.

The heart of the changes to the 2014 Chevrolet Silverado should be the arrival of the next generation GM small block V8 – an engine from the same family as the new LT1 that will power the 2014 Chevrolet Corvette when it arrives next January. This new engine is expected to deliver improved power and efficiency over the current GM small block lineup but there is a good chance that we will see some new variant of the 3.6L V6 used in pretty much every other GM vehicle that offers a 6 cylinder engine for those who want even better fuel economy.

Finally, rumors suggest that the 2014 Chevrolet Silverado will include a new high end trimline named “High Country”. This premium package will allow the Silverado to compete with the likes of the Ford F Series King Ranch and the Ram brand Laramie Longhorn. This package will likely include lots of chrome on the outside, power everything, plush leather seats, some less than ambiguous ‘country & western’ styling cues and every interior gadget that GM has in their arsenal. We can also expect that the 2014 Silverado High Country will be the most expensive package in the lineup.

It is interesting that General Motors would decide to reveal this event on Facebook, considering that the company previously decided to pull advertising dollars away from the massive social networking site. However, Facebook has been rumored to be making a plea to get the huge global automaker back on the site and perhaps GM’s willingness to debut the new Chevrolet Silverado on the heavily used website. Facebook users can watch the reveal live tomorrow morning at 9:30am Eastern Standard Time and while it has received far less publicity (read: none), the redesigned GMC Sierra should also show its face when the new Silverado debuts tomorrow.

Both the 2014 Chevrolet Silverado and the 2014 GMC Sierra will make their public debut at the 2013 North American International Auto Show next January.

UPDATE: Click here for pictures and information on the 2014 Chevrolet Silverado and GMC Sierra from the online debut!