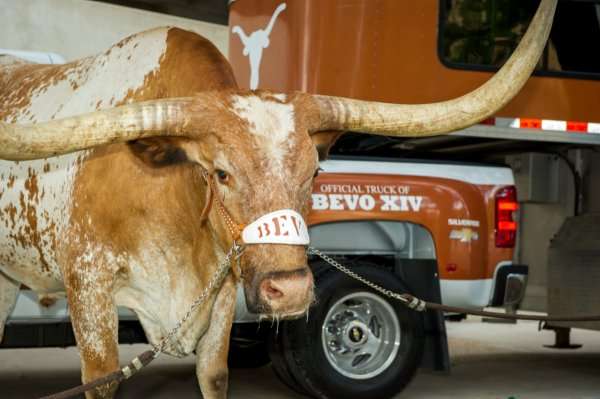 2014 Chevrolet Silverado Becomes the Official Truck of University of Texas

General Motors (NYSE: GM) announced this morning a new multi-year marketing partnership with the University of Texas to make the 2014 Chevrolet Silverado the official truck of the Longhorns – a move that will provide the school with vehicles while providing the new Silverado with exposure to one of the most critical truck markets in the US.
Advertisement

Under this new partnership between the University of Texas and General Motors, the automaker will provide the university with trucks for the school’s athletic programs. The most prominent role for the 2014 Silverado will be serving as the tow vehicle for Bevo XIV – the massive Texas Longhorn that’s serves as the University’s current live mascot. The partnership will also allow GM to place the 2014 Silverado at prominent school functions including football games, basketball games and alumni events over the course of the next few years.

“There is no more appropriate place to showcase the stronger, smarter, more capable 2014 Silverado than in the heart of truck country at Texas Longhorn sporting events,” said Chris Perry, vice president of Chevrolet Marketing.

The state of Texas is a major part of the truck segment in the US and the Detroit automakers are constantly locked in a battle to see which can get a leg up in the Lone Star State. According to General Motors, a Texas Longhorn’s fan lives in one out of every three houses in Texas and a Longhorn’s fan is twice as likely to buy a truck compared to the average American consumer. This partnership will put the 2014 Silverado in front of many Longhorn’s fans at home team sports but it will also afford General Motors, Chevrolet and the 2014 Silverado a special presence on the Longhorn network – a 24 hour channel dedicated to the University of Texas and their successful athletics programs. The new Silverado will also be featured in program specific print and online advertising campaigns, even signage and the Longhorn’s statewide radio network.

"We are appreciative of Chevrolet's generous sponsorship in this category for multiple campus areas, including athletics," said DeLoss Dodds, UT men's athletics director. "Athletics is very collaborative on campus, and the scope of Chevrolet's agreement is in line with that very spirit."

In addition to being names the Official Truck of the Texas Longhorns Athletics Programs and the Official Truck of Bevo, General Motors has also worked out a deal with the Ex-Students’ Association of the University of Texas…the Texas Exes. Under this partnership, the new Silverado will be featured at the Texas Exes’ “Biggest Tailgate in Texas”…which is likely to draw some national television coverage as well.

“We are thrilled to join forces with another high-quality, internationally recognized brand such as Chevrolet,” said Leslie Cedar, CEO and executive director of the Texas Exes. “This partnership enables us to further our mission of championing the University of Texas in its quest to become the best public university in the world.”

Considering the amount of potential coverage for the 2014 Chevrolet Silverado under this new partnership, it will be interested to see if Chevrolet begins to work with other schools (perhaps with the GMC Sierra) and to see if Ford and the Ram brand move to connect with the popular college sports teams in Texas. In the meantime, the Silverado stands to benefit from this deal with so many rabid Texas fans who are now more likely to go out and buy a new Chevy truck because it is the official pickup of their Alma Mater – or just their favorite football team.