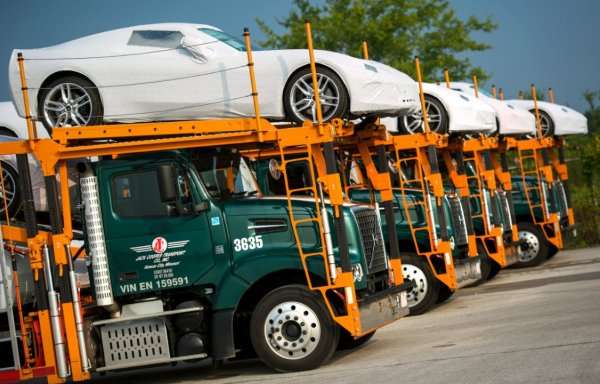 General Motors announced that the first truckload of 2014 Chevrolet Corvette Stingray Coupes left the Bowling Green Kentucky production facility en route to dealerships and happy new owners around the country - marking the official dealership launch of the C7 Corvette some 8 months after the car debuted in Detroit.
Advertisement

Production of the all new 2014 Chevrolet Corvette Stingray Coupe began earlier this year at the same Bowling Green Assembly Plant where the Corvette has been produced since June of 1981. Since production began, Bowling Green has built around 1,000 examples of the 2014 Corvette Stingray and now that these initial production units have passed the rigorous quality control process, these new American sports cars will begin reaching their new owners over the next few weeks.

“It’s an amazing sight to see the transporters filled with Stingrays heading to customers in all corners of the country,” said Dave Tatman, plant manager of General Motors’ Bowling Green Assembly plant. “The pride at Bowling Green is overwhelming and it shows in the tremendous quality and attention to detail going into each one of these new Corvettes.”

To prepare for the production process of the all-new 2014 Chevrolet Corvette Stingray in both Coupe and Convertible form, General Motors invested $131 million into the Bowling Green Kentucky facility with roughly $52 million of that earmarked specifically for the new body shop where the C7 Corvette’s all aluminum frame is built in house rather than being built elsewhere and shipped in – marking the first time that Bowling Green has been responsible for the unibody frame construction of the Corvette.

While those of us who live in the Metro Detroit area have been privileged to see the 2014 Corvette Stingray Coupes and Convertibles on local roads for months now, the start of shipping from Kentucky to plants around the United States will mark the introduction of the C7 to roads all over the country – in areas where enthusiasts have likely been able to see the new Corvette strictly at auto shows.

General Motors is careful to point out that while there are roughly a thousand 2014 Chevrolet Corvette Stingray Coupes prepared to be loaded onto trucks and shipping around the country, these vehicles are not being delivered in numeric order. This means that those buyers who already wrote a check and have a VIN number for their new Corvette in hand should not expect their car to show up right away just because they have a lower VIN sequence number. GM stresses that this is a common practice for any new model as the company ships vehicles in a manner that is the quickest rather than trying to ship cars in numeric order based on the VIN number.

Production of the 2014 Chevrolet Corvette Stingray Convertible is expected to begin by the end of the year with the first examples of those topless Vettes reaching dealerships and new owners in time for Spring of 2014.
The 2014 Chevrolet Corvette Stingray Coupe is powered by the new LT1 V8 measuring 6.2L and packing 455 horsepower and 460lb-ft of torque in standard form while those C7 Corvette Coupes fitted with the high performance exhaust system get a bump to 460hp and 465lb-ft of torque. When you couple those performance numbers with the fact that the 2014 Corvette Coupe is expected to return 17mpg in the city and 29mpg on the highway – the new Corvette is the most fuel efficient performance car on the market. No other sports car sold in America offers a combination of power and efficiency like the 2014 Corvette.