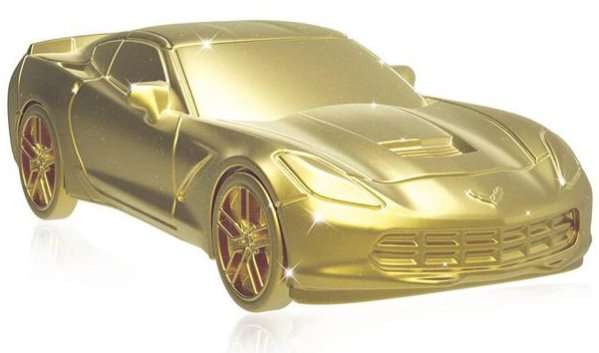 The 2014 Chevrolet Corvette Stingray will almost assuredly become one of the most heavily marketed products in the world of toys and apparel but with the help of the new Monopoly Empire board game – the C7 Corvette has become the first real car to be featured in the legendary game series.
Advertisement

The 2014 Chevrolet Corvette Stingray is already available in a variety of toy forms, from 64th scale hot Wheels die casts to the peppy Power Wheels version but that is true of many performance cars including the Dodge (and SRT) Viper and the Ford Mustang. However, with the introduction of the new 2014 Corvette game token in Monopoly Empire, the new Stingray can boast of being the first “real” car featured in the game.

The odds are good that if you are reading this, any time that you have played Monopoly you have been quick to claim the car token and provided that you are playing the new Monopoly Empire game, no longer will you be forced to show off your in-game enthusiasm for the automotive world with some ambiguous race car from the 1940s. Corvette fans and gearheads in general will now both be able to partake in the fast paced Monopoly Empire action with the 2014 C7 Stingray representing their movement around the game board. Of course, those hardcore Corvette fans will likely buy Monopoly Empire to use the Corvette token and the other new age icons with the traditional Monopoly game. In addition to the 20014 Corvette, Monopoly Empire features a Ducati sport bike, a McDonald’s French fry carton, an Xbox360 controller, a Coke bottle and a Paramount Pictures clapperboard…all finished in bright (faux) gold.

It should be noted that while the 2014 Chevrolet Corvette Stingray Coupe is the first “official” token that depicts a real world car, the Johnny Lightning die cast series has offered a Monopoly Edition in the past that included a 64th scale die cast along with a Monopoly token version of that same vehicle. Cars like the Dodge Viper, the Chevrolet Camaro, the VW Bus, the Chevy Nomad, the Pontiac Tempest, the Ford Crown Vic Police Car, the Ford Mustang and many more were included in this series but none of those came with a version of the game – making the 2014 Corvette the first car to officially grace the Monopoly game board.

Before anyone heads to the comments to point out that the car currently featured in the traditional Monopoly game is as much of a “real” car as the 2014 Chevrolet Corvette Stingray, that vague vintage race car doesn’t accurately represent a vehicle that is as recognizable as the Corvette. Because of this, the 2014 Corvette is the first real car to race around the Monopoly board.