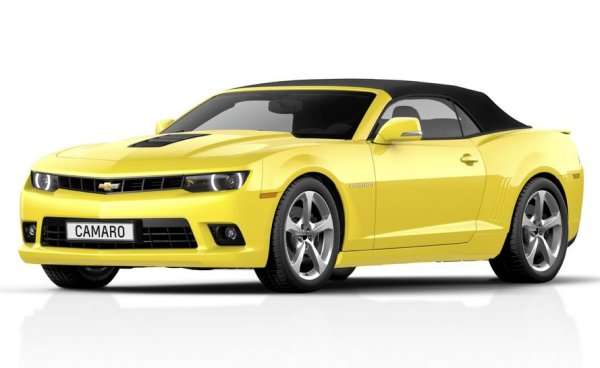 While we have already seen plenty of spyshots of the 2014 Chevrolet Camaro convertible in addition to a pair of official images of the drop top bowtie clad muscle car - the 2013 Frankfurt Motor Show marks the official debut of the restyled Camaro convertible. Not surprisingly, pretty much every styling cue from the refreshed 2014 Camaro coupe has been transferred over to the soft top models with the most significant features being the single unit taillights, the vented hood and the meaner looking front fascia.

"Camaro has always been associated with iconic design, high performance and driving fun, and we are particularly proud of the new coupe and convertible models," said Dr. Thomas Sedran, President and Managing Director, Chevrolet Europe. "They incorporate new high-tech features that add extra convenience and give customers even more value for their money," Sedran added. Since being reintroduced for the European market with the current 5th generation models, the Camaro has only been offered overseas as what Americans recognize as the SS trimline. This continues to be true with the debut of the 2014 Chevrolet Camaro convertible (and coupe) which are named simply “Camaro” in Europe rather than Camaro SS but the European-bound muscle car packs the power of our Camaro SS. This includes the 6.2L V8 with 432 horsepower and 420lb-ft of torque being sent to the rear wheels via a standard 6-speed manual transmission – although a 6-speed automatic is also available but that self-shifting transmission also comes with a drop in power. This powerful engine allows the 2014 Camaro coupe with a manual transmission to dash from 0 to 100kmh (62mph) in 5.2 seconds while the slightly heavier convertible takes 5.4 seconds to hit 100 for Europeans.

While some diehard GM fans are sure to gripe about the fact that the company has debuted the convertible version of the both the refreshed 2014 Chevrolet Camaro and the all-new 2014 Chevrolet Corvette Stingray at European auto shows, the decision to reserve these drop top debuts for “foreign” markets serves to show the importance of these areas to the growth of GM’s performance car sales. While Americans will almost surely buy more new Camaro and Corvette coupes and convertibles than buyers in any other country, the decision to first show off the 2014 Camaro convertible and the 2014 Corvette Stingray convertible on the other side of the pond allows the American automaker a chance to catch the attention of show goers and prospective buyers alike. Anyone who has been to a major auto show here in the US surely knows that a big debut helps to draw attention to that automaker’s display and with the growth in popularity for the Camaro in many foreign markets – the 2014 Camaro convertible debut should help GM steal some sports car thunder from some of the European automakers. While General Motors is looking to put more American muscle cars in the driveways of European buyers, the luxury of owning one of the ultimate American performance cars doesn’t come cheap. The 2014 Camaro coupe will cost German buyers €39,990 which, with current conversion rates, translates to about $53,000 while the Camaro convertible carries a price of €44,990 (close to $60,000 USD). With a cost of $60,000, it is really no wonder why GM is looking to push the drop top Camaro in Europe.