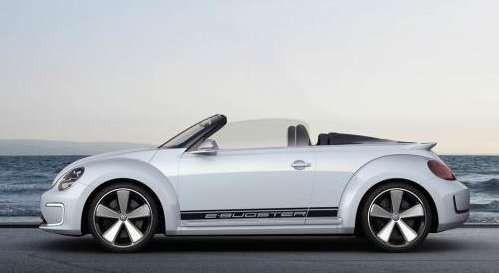 Volkswagen Auto Group has confirmed that the 2013 Volkswagen Beetle Convertible will debut later this year at the 2012 LA Auto Show – introducing the world to the production version of the new open-aired Beetle.
Advertisement

The German automaker hasn’t offered any sneak peeks of the 2013 Volkswagen Beetle Convertible but rumors suggest that it will look a great deal in terms of exterior design like the VW E-Bugster Concept shown in the image on the right. We expect that, unlike the E-Bugster, the 2013 Beetle Convertible will not have the huge wheel flares, the chopped top look or the unique fog lights in the front fascia, instead opting for a front end that should look very similar to the current production Beetle Coupe.

Also, the production Beetle Convertible for 2013 will most likely come with a traditional cloth top rather than the large, one piece molded hard convertible top featured on the E-Bugster. This is a shame as that sleek removable hardtop looked great at the 2012 Detroit Auto Show but a top like that is expensive, heavy and often hard to deal with when the driver wants to remove it. On the other hand, a nice fold-away canvas top cuts weight, cost and effort. We can expect that the 2013 Beetle Convertible will also avoid the curvy reflectors mounted on the lower fascia of the E-Bugster – instead opting for a traditional straight reflector.

Inside, the 2013 Volkswagen Beetle Convertible headed to the 2012 LA Auto Show should feature an interior layout very similar to the current production Beetle coupe with seating for four where the E-Bugster had only two seats in its roadster concept form. Unlike the Beetle Coupe, the Convertible will need to make room for the hardware for the retractable top so there could be some drop in rear seating space but the company could go with the old school look and have the top “stack” over the back end like the previous Beetle Convertible.

In addition to the new look that carries over from the Beetle Coupe, the 2013 VW Beetle Convertible is rumored to offer a handful of trim packages themed after eras of Americana including the 1950s, 1960s and 1970s. these packages will include old school styling with retro, period correct color options that could really bring about some incredibly cool configurations. Unfortunately, VW has not confirmed the existence of these era packages but based on the rumors, we are hoping that they become a reality when the new drop top Bug hits LA later this year.