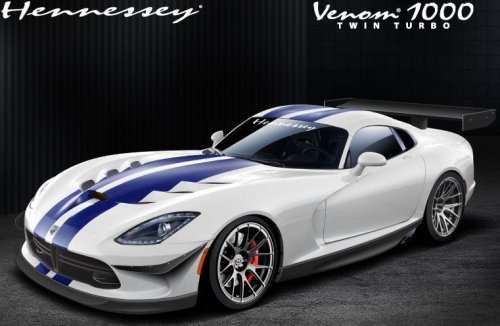 The folks from Hennessey Performance have a long history of building ultra high performance versions of the Dodge Viper that bear the “Venom” name but with the introduction of the 2013 Hennessey Venom 700R and Venom 1000 Twin Turbo – the Texas supercar tuning company has raised the bar for the 2013 SRT Viper aftermarket.
Advertisement

Hennessey Performance has been tuning the Dodge Viper since the late 1990s with their previously most famous models being the likes of the 2000 Viper Venom 800TT and the 2006 Viper Venom 1000 Twin Turbo but with the introduction of their new Venom models based on the new 2013 SRT Viper – Hennessey is looking to eclipse everything that they have built in the past. The 2013 Hennessey Viper Venom is offered the naturally aspirated 700R form offering 725 horsepower along with the incredible 1000 Twin Turbo that packs a stunning 1,120 horsepower. Both of these packages are available for the 2013 SRT Viper and SRT Viper GTS.

The 2013 Hennessey Viper Venom 700R
The Hennessey Venom 700R begins with the standard 8.4L V10 found in the 2013 SRT Viper that produces 640 horsepower and 600lb-ft of torque but with a variety of modifications including high flow cylinder heads, stainless steel long tube headers, a high floor catalytic converter setup, a stainless 3” exhaust system, a K&N air intake system and a proper engine tune – the Venom 700R offers 725 horsepower and 695lb-ft of torque. According to Hennessey, this setup allows the modified 2013 Viper to rip from 0-60 in just 3.1 seconds with a quarter mile time of 10.7 seconds and a trap speed of 134 miles per hour. Oh, the Venom 700R will also reach a top speed of 216 miles per hour. This package also includes items like serialized dash and engine plaques and unique exterior badging. This package includes a limited 3 year, 36,000 mile warranty.

Those who want their Hennessey Venom 700R to look as fast as it will go can opt for a long list of external modifications that begin with the VenomAero exterior package that adds a unique front splitter, a rear lip spoiler or large GT style wing and front canards (all of which are made out of carbon fiber). Next, Venom 700R buyers can opt for some features that change the look and improve the performance of the Viper including lightweight monoblock wheels, a Penske adjustable coil over suspension system (presumably most enticing to non-GTS owners who want improved handling) and a rear differential cooling system. Finally, buyers can add interior bits that include custom color scheme layouts, 5-point racing harnesses with the Hennessey and Venom logos, a roll cage, a Halon fire extinguisher and other carbon fiber trim pieces.

The 2013 Hennessey Viper Venom 1000 Twin Turbo
Those who want to have what will amount to being the fastest 2013 SRT Viper on the road can opt for Hennessey’s incredible Venom 1000 Twin Turbo package. As the name notates, the Venom 1000TT is a full engine package that changes basically everything shy of the crankshaft and the engine block itself. This monster engine build includes cylinder heads, forged aluminum pistons, forced steel connecting rods, ARP 2000 rod bolts, thermal coated rod bearings, a computer balanced rotating assembly, twin ball bearing turbochargers, a front mounted air to air intercooler, stainless steel inlet tubes, stainless steel headers and downpipes, a full external waste gate system, stainless 3” exhaust, a fully upgraded fuel system and a new engine management system that has been calibrated to make – get ready for it – 1,120 horsepower and 1,092lb-ft of torque. This allows the 2013 Hennessey Viper Venom 1000TT to rocket from 0-60 in only 2.7 seconds while running a quarter mile of 9.7 seconds at 152 miles per hour when the car was fitted with drag radial tires. No top speed has been stated but considering that the less powerful 2006 Viper Venom had a reported top speed of280 miles per hour and was able to beat the Bugatti Veyron from 0-200 – we can expect that this monster twin turbocharged Viper will have a top speed well above the 216mph best of the Venom 700R.
“Wow!” is right.

The Hennessey Viper has become the stuff that dreams are made of for automotive enthusiasts and Viper owners alike so with such an impressive offering based on the 2013 SRT Viper – we can expect to hear more about the 2013 Hennessey Viper Venom as they are put through the high performance testing procedures to verify what they are capable of in the real world.