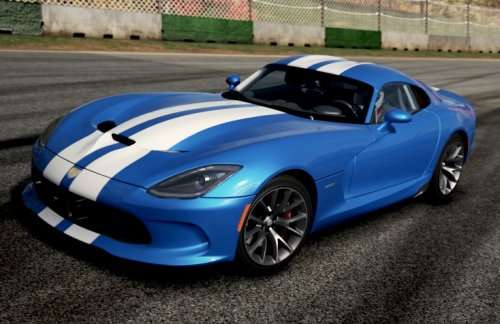 Unlike the majority of downloadable content packages (DLC) which come with a price, the 2013 SRT Viper pack is free to Forza Motorsport 4 gamers – although buying the car in-game will cost you 95,000 FM4 credits. Surprisingly, the new Viper Pack in the Xbox 360 Marketplace only includes the one car and the Forza 4-sponsored 2013 Viper GTS-R headed for the American LeMans series is not included but for a free DLC package…we don’t have any complaints.

The 2013 SRT Viper GTS in Forza Motorsport 4 is an S Class vehicle with a vehicle rating of 638. In stock form, the 640 horsepower 2013 Viper GTS offers a speed rating of 9.0, a handling rating of 6.1, an acceleration rating of 8.6, a launch rating of 7.9 and a braking rating of 6.0 – all out of a possible ten. For comparison, the 2012 Chevrolet Corvette ZR1 is an S Class vehicle with an overall rating of 633 and while the ZR1 is one of my favorite cars on the game – the new 2013 Viper GTS is a much better car in the game. I play Forza Motorsport 4 with the traction and stability programs off and with the ZR1, coming out of a corner under hard throttle can be a bit of a challenge as the super Vette is more than willing to break traction but the 2013 SRT Viper is a far easier car to drive (again, in the virtual world) than the ZR1.

Those gamers who download the free 2013 SRT Viper Pack and then head off to the dealership area to buy the car might be surprised to not find the Viper in the Dodge area. The 2013 SRT Viper is the first installation in the supercar lineup not to sport the Dodge name but since the rest of the Vipers are in the Dodge area, I expected it to be in the Dodge dealership area. When it was not, I then went looking for an SRT section but, surprisingly, it was not there. In an odd move, the Forza Motorsport 4 dealership area adds a “Viper” category near the end of the dealership lineup with the only vehicle found inside being the 2013 SRT Viper GTS. There is a fair spread of exterior colors and stripe packages but sadly, the metallic blue (shown above on the right) is not available – although it can be applied via the modification system.

The image on the right was captured from Forza Motorsport 4 for TorqueNews by the folks at TheXboxSource.com with the 2013 SRT Viper GTS shown in the same metallic blue with white stripes that was popularized with the original Viper GTS in the 1990s.

I expected that the 2013 SRT Viper Pack would come with some additional events – specifically in the Rivals area. There is nothing thus far but with a new monthly Rivals lineup expected within the next two weeks, perhaps the folks at Turn 10 will add a Viper event for July Rivals.

Production of the full sized 2013 SRT Viper for the real world begins later this year, both in standard and GTS trim. As the ultimate American performance car, the 2013 Viper is fittingly being built at the company’ Connor Avenue production facility in Detroit. When it hits the streets, the Chrysler Group expects that it will continue to serve as one of the pinnacle high performance vehicles in the world.