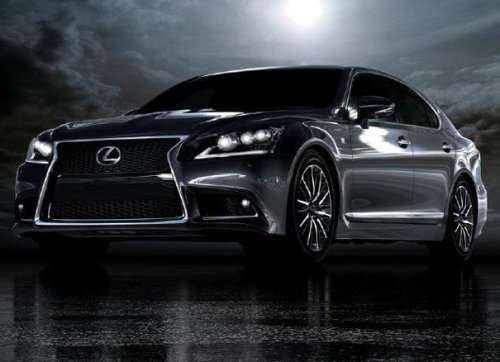 The 2013 Lexus LS lineup is expected to be formally unveiled next Monday in San Francisco and around the world via the internet but today, the Lexus Facebook page offered us an early first look at the new 2013 Lexus LS 460 F Sport.
Advertisement

When the 2013 Lexus LS sedan is unveiled next week, there will be a total of four variants including the LS 460, the LS 460 L (long wheelbase), the LS 600h L Hybrid and the LS 460 F Sport pictured on the left. While we would expect that the LS 460 F Sport packs some exterior design cues that are unique to this model and at least a little more aggressive than the standard LS 460, this first official image gives us a great look at what to expect from the entire 2013 LS lineup.

Not surprisingly, the 2013 Lexus LS 460 F Sport wears an aggressive new front fascia that proudly features the familiar spindle grille, finished here in what looks to be gloss black on both the meshing and the thick bar running across the middle of the front end. This grille design is already in use on the 2013 Lexus GS lineup along with the redesigned Lexus ES that will soon join the company lineup, so it comes as no surprise that the LS will also feature the new grille design. However, the new LS flagship sedan features the spindle design in what looks to be the boldest application ever.

The actual shape of the spindle grille found on the 2013 Lexus LS 460 F Sport is more like the one seen on the GS sedans, with a smaller top portion and a larger lower portion while the new ES has a more balanced design, top to bottom, while the entire LS grille is trimmer in chrome. We expect that the grille option of the front fascia shown here will be similar on the non- F Sport models but the large ducts and foglights mounted towards the outer edge of the front fascia could be the aggressive design feature that is specific to the F Sport models of the 2013 Lexus LS range. We would also expect that the mesh grille filler could be replaced by horizontal bars, similar to the differences between the 2013 Lexus GS 350 and the GS 350 F Sport.

The headlights of the 2013 Lexus LS 460 F Sport are narrower than the current LS sedan and we would expect that these will carry over to the rest of the lineup, although the three-unit projection assembly may only be standard on the F Sport and Hybrid. The 2013 LS 460 F Sport also wears a set of LED trimlights that run under the headlight assemblies that will likely be included throughout the model range. Across the top of the headlights is a hood with powerful styling lines that run front to back with a wide, flat design. The hood will likely carry over to the other 2013 LS models.

Along the side, the new 2013 Lexus LS 460 F Sport wears some massive, sporty wheels that are almost surely a part of the F Sport package so we expect something a little more “tame” on the standard 2013 LS 460. The F Sport also appears to have a lower side skirt area that dips down very far and while that could carry over to the non-F Sport models – it looks like it could be a sport model feature.

The 2013 Lexus LS lineup is expected to be fully unveiled next Monday, including a look at the new LS 460, the LS 460 Long wheelbase, the LS 600h L long wheelbase hybrid and the LS 460 F Sport shown above along with a full complement of information on all of the new Lexus LS models for the 2013 year. Based on what we have seen thus far, the 2013 LS lineup looks pretty much how we expected but that isn’t a bad thing by any means. Click here for more information on the July 30th launch of the full Lexus LS lineup.