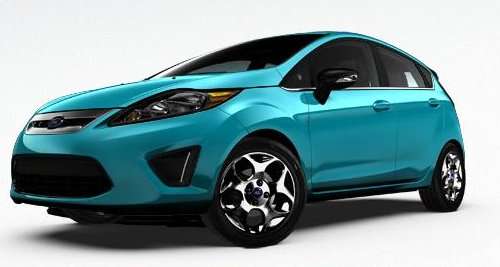 Ford has announced that for the 2013 model year, the Ford Fiesta will include the new range-topping Titanium trimline in place of the SES trimline that lead the model lineup for 2012 as well as the new Black Sport package which is available only for hatchback models.
Advertisement

The 2013 Ford Fiesta Titanium enters as the replacement for the 2012 Ford Fiesta SES as the Motor Company moves to offer similar trimlines across their model lineup. The Fiesta joins the Focus, the 2013 Escape, and the 2013 Fusion in utilizing the Titanium name for the premium trimline. It will be interesting to see if the Taurus, Edge and Explorer get Titanium trimlines as time goes on although with the Taurus offering the SHO while the Edge and Explorer feature Sport trimlines – those models may not stray from the sporty premium models in favor of the more luxurious package.

The Fiesta Titanium builds on the amenities of the Fiesta S and Fiesta SE with the new top of the line trimline adding heated leather seats, Sirius satellite radio, 16 inch premium wheels, a perimeter alarm system, Ford’s SYNC system and push-button start. Like the other trimlines, the 2013 Ford Fiesta Titanium is powered by the 1.6L Duratec 4-cylinder engine with the buyer’s option of either a 5-speed manual or 6-speed automatic transmission. This drivetrain offers 120 horsepower and 112lb-ft of torque while achieving 29 miles per gallon around town, 39 miles per gallon on the highway and a combined figure of 33mpg – figured that are consistent across the entire 2013 Fiesta lineup (sedan or hatchback, S, SE or Titanium trimlines) with the exception of the SFE models.

Finally, the 2013 Ford Fiesta Titanium hatchback receives the new Black Sport package for an additional $795 (shown in the image on the right). This includes unique high gloss polished 16” alloy wheels, LED parking lamps with black bezels, a black rear spoiler, black exterior mirrors, black window trim, and cruise control. Those Fiesta Titanium hatchback models equipped with the 5-speed manual transmission also gets a steeper final drive of 4.25 to 1 for improved acceleration. There is no similar package currently offered for the Fiesta Titanium sedan.