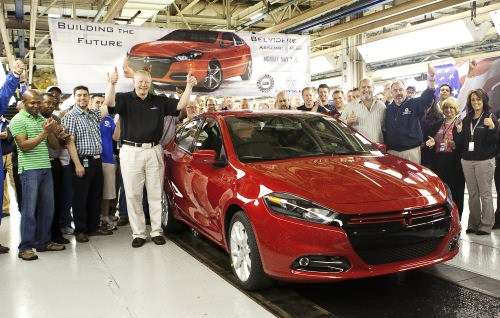 Today the Chrysler Group announced the start of production for the 2013 Dodge Dart at the Belvidere Assembly Plant in Illinois – with the very first new Dart to roll off of the line for public consumption being a 2013 Dart Rallye powered by the optional 1.4L turbocharged engine fitted to a manual transmission.
Advertisement

The 2013 Dodge Dart will begin hitting showrooms soon with the SE, SXT, Rallye and Limited trimlines and the very first ever full production version of the new C segment sedan was a Dart Rallye in Redline Red Pearl Coat, featuring the unique body dressing of this sporty package. This particular 2013 Dart Rallye received the Black with Ruby Red interior package with a leather wrapped steering wheel featuring audio and cruise control buttons (Dart Rallye models can also have an interior in Light Diesel Grey, Diesel with Light Diesel Grey, or Diesel Grey with Citrus Peel). On the outside, the Dart Rallye wears the unique black grille surround, black headlight bezels, projection fog lights, integrated dual exhaust, and 17” aluminum wheels with the option of Hyper Black wheels instead of the standard silver shoes.

The standard engine for the 2013 Dodge Dart Rallye is the 2.0L Tigershark engine but the first Dart Rallye was equipped with the optional 1.4L turbocharged MultiAir engine borrowed from the Fiat 500 Abarth – packing 160 horsepower, 184lb-ft of torque and the best fuel economy of the lineup thanks to the 6-speed manual transmission. While the Dart Aero models set to reach the market in the third quarter of 2012 will offer better than 41 miles per gallon, those 2013 Darts powered by the 1.4L engine and the 6-speed manual transmission offer an impressive 27mpg around town and 39mpg on the open road – making it one of the most efficient models in the segment while also being one of the most powerful.

In addition to packing the optional 1.4L turbocharged engine, the first 2013 Dodge Dart Rallye produced was upfitted with the optional rear view camera system and a sunroof. While exact pricing specifications have not yet been offered thus far, we know that the 2013 Dart Rallye carries a starting price of $19,790 (including the destination fee) plus the cost of those upgrades listed above for a total that is likely in the low 20k range.

The 2013 Dodge Dart in the first four trimlines will begin arriving in dealerships in June with the high performance Dart R/T and highly efficient Dart Aero models arriving during the third quarter of this year. The Belvidere Assembly Plant that is currently building the new Dodge Dart also builds the Jeep Patriot and Jeep Compass – having built the Dodge Caliber hatchback until production of that less-than-popular model ended late last year.

Click here for a closer look at the pricing and feature specifications of the 2013 Dodge Dart. Details are still somewhat limited but with the Dart set to hit showrooms around the country in the next 60 days – we can expect to soon have a very good look at exactly how much it will cost for prospective Dart buyers to take home the new Dodge C segment sedan.