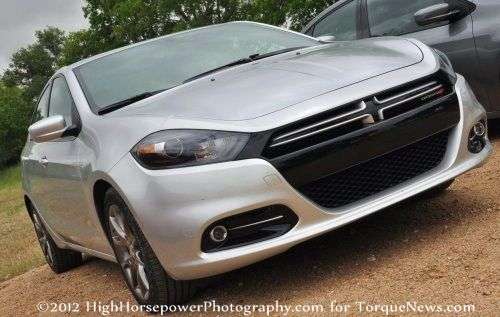 According to a few dealerships who have spoken with Automotive News, dealership allocation numbers for the hot new 2013 Dodge Dart is partially based on how many units of the Dodge Caliber the hopeful dealers sold before the unpopular hatchback was discontinued last year.
Advertisement

The Chrysler Group began accepting dealer orders last week for the 2013 Dodge Dart but as the company begins sending European inspired compact sedan to dealerships around the country; it has to decide how to allocate the first production units among the many dealers demanding high volumes of the new model.

While the Chrysler Group has declined to comment on exactly how they would decide how many of the 2013 Dart sedans would be sent to which dealerships, some dealerships have stated that the early unit allocation will be based on how well the dealerships in question sold the old Dodge Caliber. Sales of the Caliber were never what the Chrysler Group had hoped when they launched the car for the 2007 model year and even though production of the wonky little hatchback ended last December, Automotive News reports that there are still some 2,200 Calibers sitting on dealer lots around the country.

While some prospective consumers who want to get their hands on a new 2013 Dodge Dart might be upset to learn that their local Dodge dealership will not be getting many (or any) of the early Dart production models, this is a decision that makes sense.

Those dealerships who sold higher volumes of the Dodge Caliber are likely in areas where compact models are prone to be more popular than other dealerships. After all, if a dealership can be among the top group to sell the highest volume of a poor-selling vehicle in the compact class, it would make sense that those same dealerships would have more interest in the Dart – which is better than the Caliber in basically every imaginable way. This also means that the nation’s largest volume dealerships will likely get the most new Dart sedans as the sheer volume of vehicles sold will allow them to have been among the leaders in Caliber sales.

Yesterday while driving through the Warren Michigan area, I saw at least a dozen bright red 2013 Dodge Dart sedans wearing dealer plates on the open road – leading this writer to believe that the earliest stages of dealership deliveries are being made (a belief supported by the sight of trucks loaded full of new Darts spotted recently around the Detroit area). These initial units reaching dealerships are intended by the company to be dealer demonstrator models with the first major group of Darts intended for sale arriving sometime in late July or early August.

This projected delivery date is a bit later than the June arrival date originally quoted by Chrysler but according to CEO Sergio Marchionne, the company ran into some early production issues. He went on to point out that these were typical problems that can befall any brand new model and that the extra time was taken to cure these issues – although no specific details were given.

The 2013 Dodge Dart carries a starting price of $16,790 (all prices include the $795 destination fee) for the entry level SE package while the SXT starts at $18,790, the Rallye starts at $19,790 and the Limited starts at $20,985. Dodge hopes that the combination of big power (relative to the rest of the class), the great fuel economy, the loaded up interiors and the sporty, aggressive exterior design will help the 2013 Dart meet (and exceed) the sales success seen by the Dodge Neon in the late 90s and early 2000s.

Elon Makes a Cybertruck Statement With an Action, But Quiet in Words
Tesla's Record Month in China: Doubled Registrations in March 2021
END_OF_DOCUMENT_TOKEN_TO_BE_REPLACED